I don’t have anything against the idea of TV; in fact, I consider TV to be the new novel. When I power-watch three or four—OK, five—episodes, I get the same woozy, drugged-out high as from being lost in a book. What I hate is how a TV looks, a black hole on the wall trying to suck light out of a whole universe. Plus, it has ugly sidekicks skulking around: modems, woofers, blinky black boxes, and cords. Here’s how to fix those problems.

But first: How did I come own an enormous flat-screen TV in the first place? The usual way. My husband tricked me into it.

About three years ago, we moved across the country and my husband, arriving in New York City a few weeks ahead of me, took advantage of my absence to rush out to a harshly lit electronics store on Broadway to buy the biggest TV he could find—possibly the largest one in existence at that time. I got to town to find it propped on cinder blocks in the otherwise unfurnished living room of our apartment, with about a billion black snaky cords spilling out and attaching it to a life-support system of bizarrely pulsating blinky boxes. “Isn’t it beautiful?” my husband asked.

Of course I wanted to get rid of it. I mean, I haven’t even known how to turn on a TV since the advent of those remote control things, much less how to change a channel (are they still called channels?). But then the weather turned cold and gray, and I got sucked into watching episode after episode of Downton Abbey or Mad Men or Grey’s Anatomy. (This is a much more instantaneous way to entertain oneself in New York, by the way, than bundling up in a coat and boots and scarf and gloves and going into the hall to wait for the creaky old elevator; riding slo-o-o-wly down nine flights with the neighbors who you don’t know and their dog; walking to the subway; breathing through your mouth to avoid the bad underground smell while waiting for a train, and then riding it somewhere to do something.)

By the time I moved back to California and remodeled my house a year ago, the TV was my friend. I wanted to find a way to keep it in my life without ruining the beauty of the new, no-cinder-block decor of my house. This is where my friend Stephanie Dorfman, a designer and certified cord removal specialist, stepped into the picture. 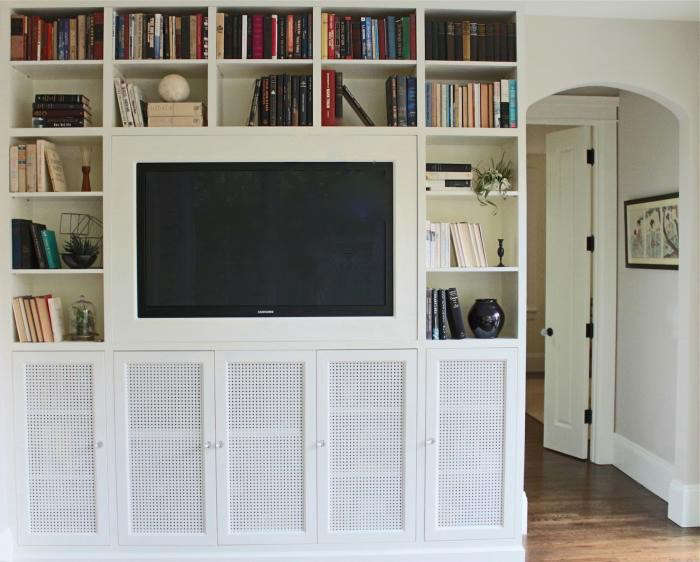 Above: Is this the biggest TV you have ever seen? No? Good. It’s an optical illusion.

Secret No. 1: To minimize the TV’s hulkiness, Stephanie surrounded it with deep bookshelves. The screen sits flush with the front of the shelves, making the TV seem barely three-dimensional and no more obtrusive than, say, a chalkboard.

Secret No. 2: The TV is surrounded by a generously sized, five-inch-wide frame with a beveled edge, like a picture frame, further diminishing the screen. (The frame is attached by magnets and pops off so my husband can rummage around behind it with cords, etc.).

Secret No. 3: Notice how the whole wall—shelves, cabinetry, frame—is painted a single neutral, light color. This further downplays the TV, which is mounted on an arm against a false wall that’s shallower than the wall behind the surrounding bookshelves; cords attached to the TV drop behind it into the cabinets below. 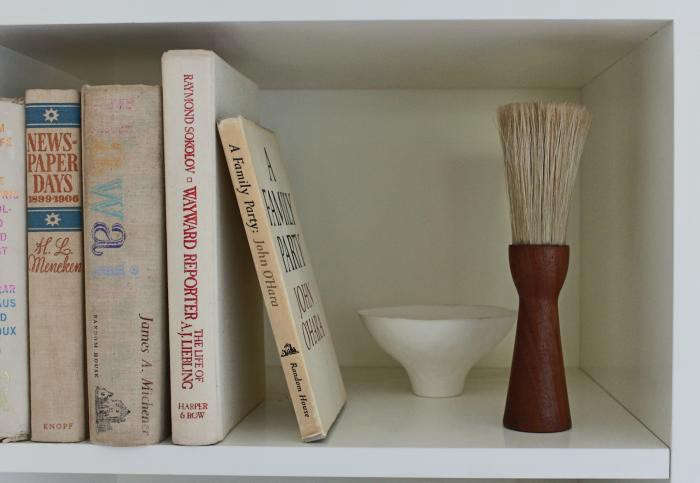 Dealing with TVs is one of those design dilemmas that never goes away. In other words, the size and shape of TVs change but they still look bad—just in new, bad ways. In my grandparents’ house, an entire corner of the living room was a no-man’s zone given over to an old-fashioned TV cabinet from the Pleistocene era; the set hadn’t worked for years, but there was no move to get rid of it (in those days, furniture was a life sentence; the prehistoric sofa had lace doilies sewn over bare patches on the arms). You knew to avoid the TV cabinet corner if you were playing hide-and-seek because it had sharp corners to jab you as you tried to slip past the person who was “It” without being tagged.

Then came Armoire Armageddon. In the 1990s, TV sets still were about three feet deep, and I was one of those people who bought into the “let’s-get-an-armoire-to hide-the-TV” craze. Flash forward 20 years, with flat screens everywhere and all these hulking, superfluous armoire things taking up space in living rooms across America. I gave mine away—overnight, it seemed, its value had dropped from the $800 I’d paid for it to $0—and still feel lucky that someone would take it. Given the number of TV armoires that are still out there, lurking in corners of living rooms, I expect that eventually we’ll see them littering highways like discarded mattresses. 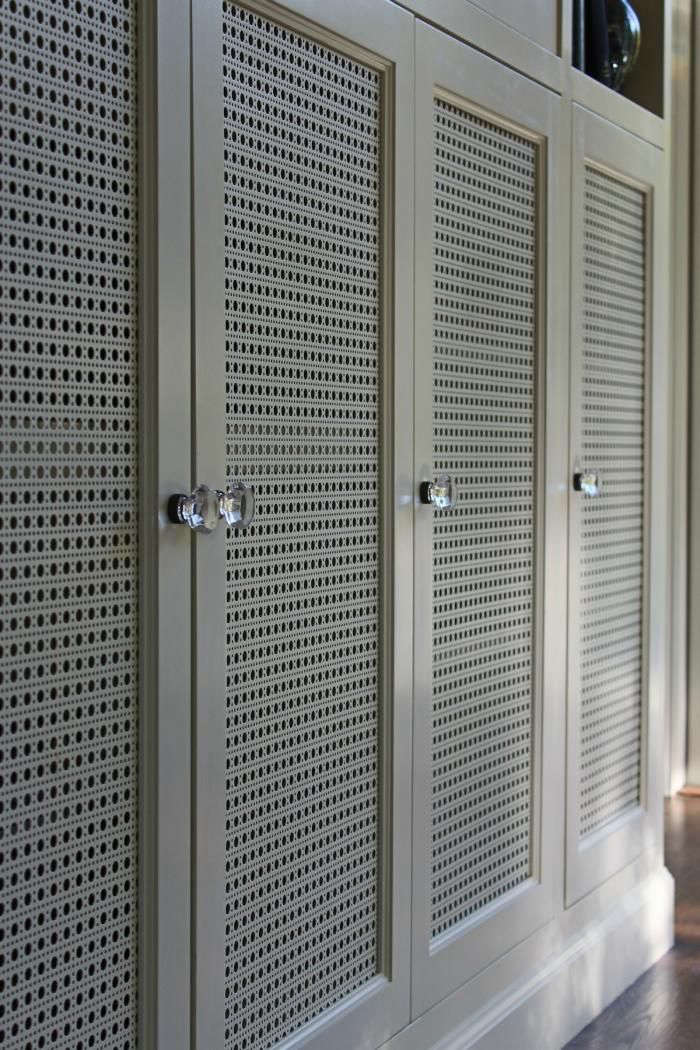 Secret No. 4: Put all that horrible TV-related stuff inside cabinets, and put vented doors on the front so the electronics don’t overheat. Beneath the TV, Stephanie designed doors with Octagon Cane Decorative Perforated Metal. For more information on perforated metal patterns, see Direct Metals. 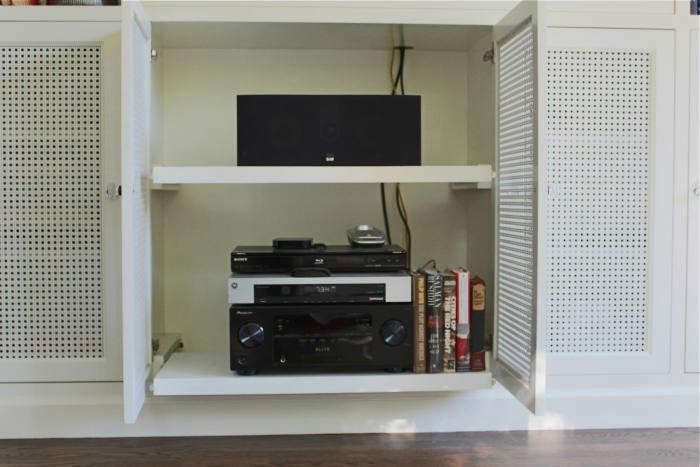 See where the cords drop down from the TV above?

Secret No. 5: Put all the electronic components on pullout drawers so it’s easy to get to the cords at the back. Our TV is attached to a receiver that’s connected to a set of five surround-sound speakers including a subwoofer the size of a dorm refrigerator; a router; a Blu-Ray DVD player; a Sonos hi-fi system bridge, and an Apple TV. I don’t know what any of these things are—my husband insisted we “needed” them—but I am happy I cannot see them. They live inside these cabinets.

There is a messy tangle of cords attendant to any entertainment center setup; I put a few books on the bottom shelf to hide the cords (and the power strip to which they are attached). 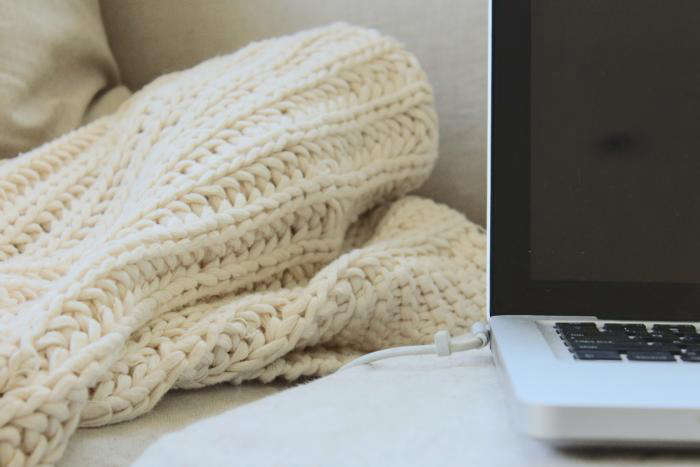 Secret No. 6: Let your furniture help you hide the cords. At my house, the power strip hides between two pieces of my sectional sofa.

In the family room, we lounge around a lot on the sectional with our computers (sometimes while simultaneously watching TV—sick, I know). Where the two pieces of my sectional meet, a power strip lurks beneath on the floor. You can pull up a cell phone charger, an iPad cord, possibly even the charger to my husband’s electric shaver. There’s a lot hidden under the cushions. 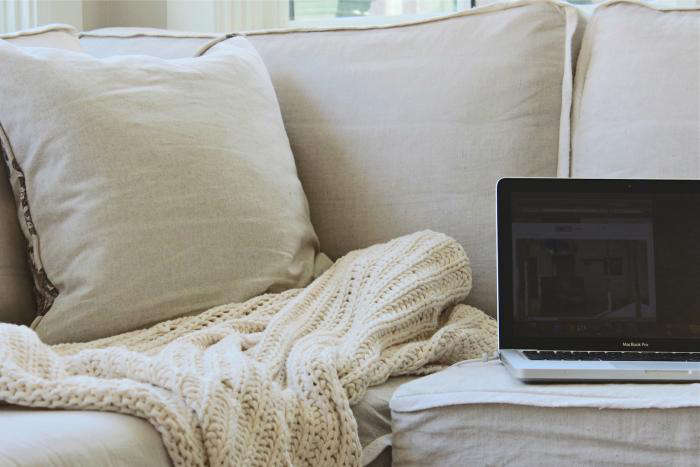 Above: From a distance you would never know a nasty tangle of wire is attached to the power strip that sits beneath the sectional. The whole spaghetti-bowl mess is tucked between the cushions of the sofa, and we fish out the appropriate cord when we need it. Cost: $7.25 (for a Belkin Six-Outlet Home/Office Surge Protector from Amazon).

If you don’t have a sectional, you still may be able to accomplish this neat trick. Simply attach your power cords to a power strip that sits on the floor behind the sofa, and thread the cords up through cushions or unobtrusively up the side of an arm. 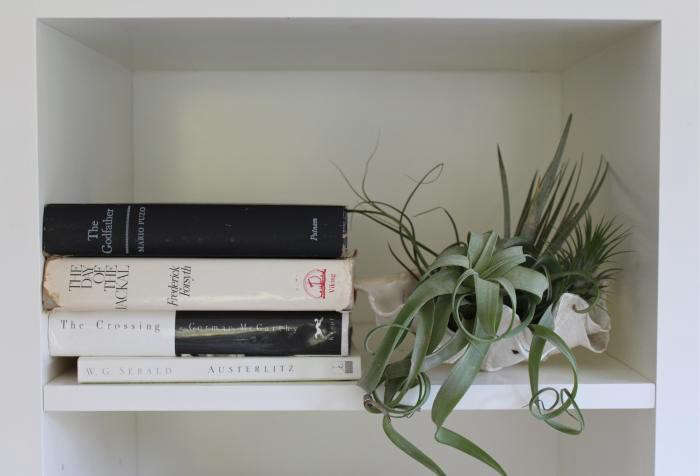 Secret No. 7: Maintain some electronics-free zones in the family room. On my bookshelves are, well, books. And plants. Can’t you just feel all that oxygen coursing into the room? Empty white space is a design element that makes the area around the TV set feel more open and spacious.

And now? I still have a few episodes of House of Cards (the British version—I finished power-watching Kevin Spacey and Robin Wright last week) to catch up on. Reminds me of Bleak House.

Emboldened to rid your life of all cords once and for all? Miracles do exist. See 5 Ways to Banish Computer Cords from Your Home Office.