When designers Michael Roché and Jackson Butler were asked to renovate a small Napa Valley house, the mandate was to stay within a tight budget. Built as a cabin in the 1920s, it had been added onto over the years, and when purchased was half renovated and in a state of disarray. Its selling point: the structure is set in vineyards on a west side slope overlooking the Napa Valley floor. The owners, retired hockey star, Valeri Bure and his wife, actress Candace Cameron Bure, have their own wine label, Bure Family Wines, and were in need of a place where Val could stay, work, and entertain during his regular visits north from LA, where the couple and their kids are based.

The Bures had worked with the designers on the redesign of a modest ranch house and so their likes (a clean look) and dislikes (pricey appliances) were well understood. The kitchen was the tricky part. Roché explains “We knew we wanted the kitchen to be connected to the main living space, and the living space to be connected to the vineyard view.” The challenge was how to match the kitchen to the reclaimed barn siding used to clad several walls in the living room. The solution? Ikea cabinets refaced with barn wood. Here’s how they did it. 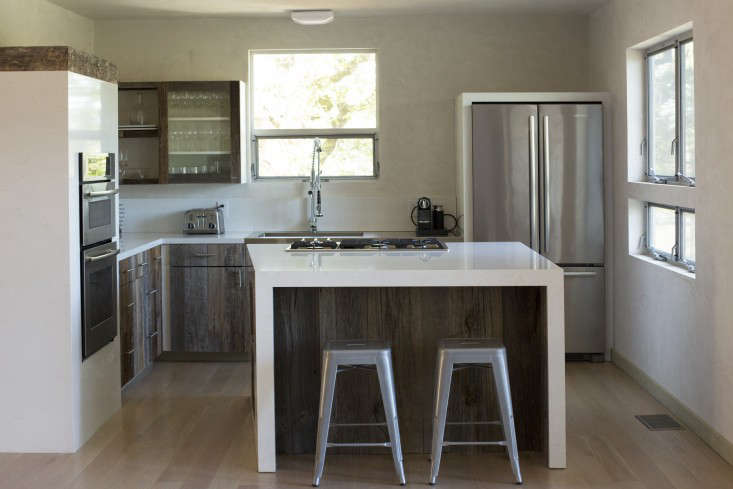 Above: The kitchen is trapezoid-shaped to lend the feeling of openness and create an easy flow from the living room. For a clean look, Roché selected Dovedale countertops made primarily of quartz from Cambria, a Minnesota-based stone company that supplied counters for the Bures’ previous house. “We like that it’s a continuous material, virtually seamless, and we wanted to do a waterfall edge,” says Roché. “It also introduces a good contemporary contrast to the barn wood.” To unify the space, the designers extended the surface to wrap around the refrigerator. 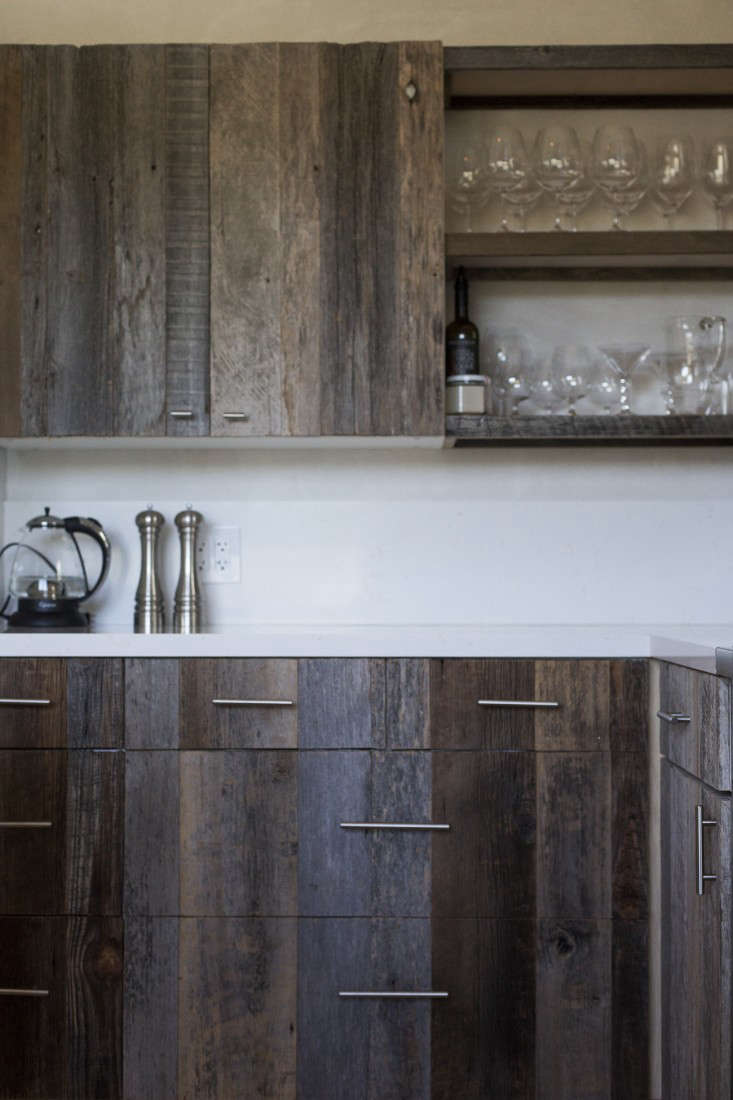 Above: For the cabinets, Roché chose Ikea Akurum boxes with Applad doors and drawer faces, which he had also used in Bure’s previous house. As he explains, “We knew they worked well, but none of their finishes matched the living room’s barn wood. We happened to discover that one of the contractors is a master cabinetmaker, so we had him create face frames for the Ikea boxes from the same reclaimed wood used in the living room.” 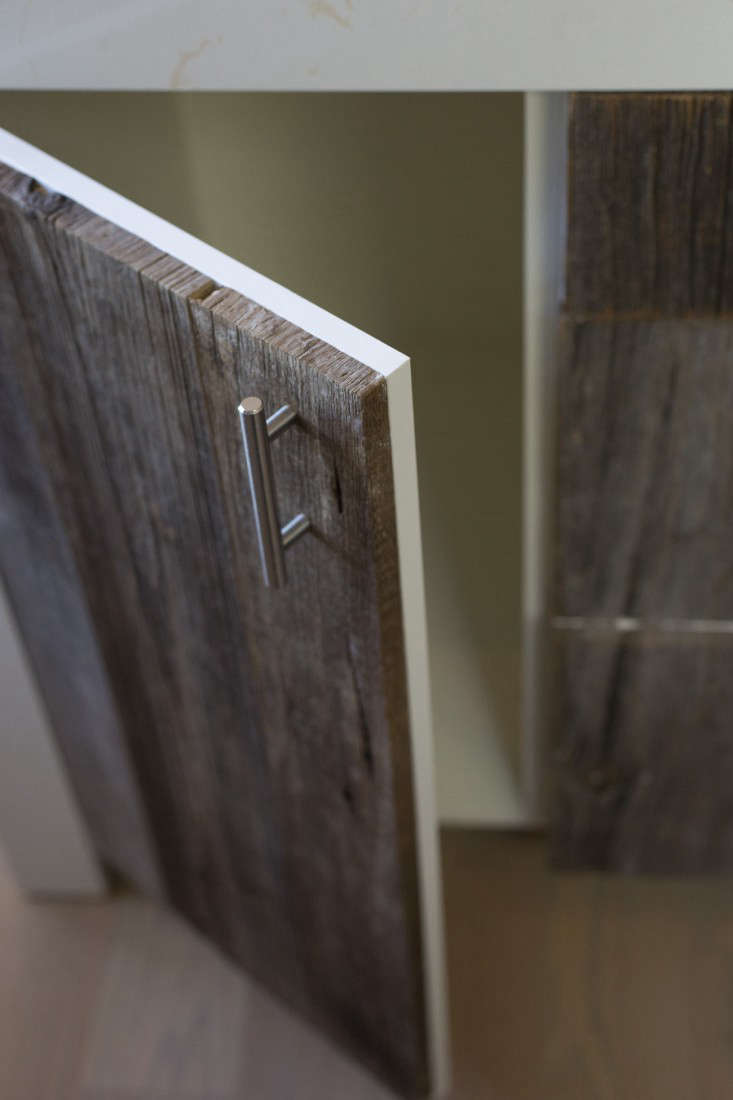 Above: Cabinet details: all of the vertical ends are finished with a 45 degree miter to continue the grain. Roché tells us, “It really makes a difference–instead of fresh-cut raw wood, you see a weathered edge that has a seamless look”. 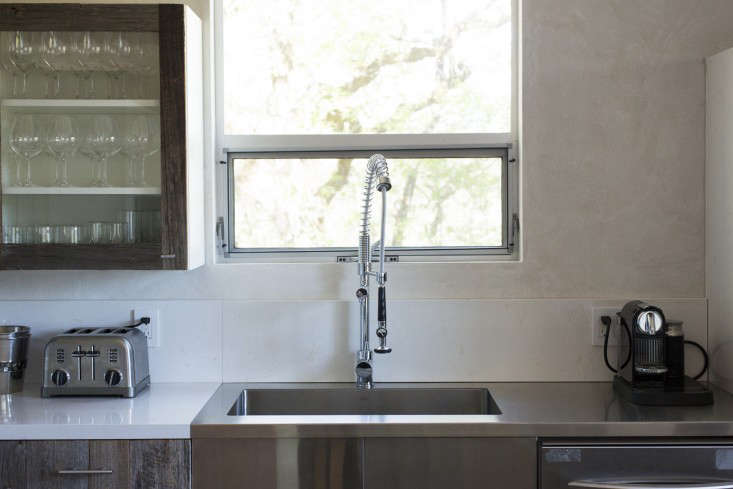 Above: The stainless counter is custom-made and fitted with an undermount sink. The swivel-spout faucet is the Kraus Commercial Pre-Rinse Chrome Faucet sourced from Overstock.com for $299.95. “We played a lot of digital tennis on this project,” says Roché. “I would email something fancy and Val would come back with something similar and cheaper from Overstock.” When Roché suggested the Tara Dornbracht, Van countered with the Kraus. 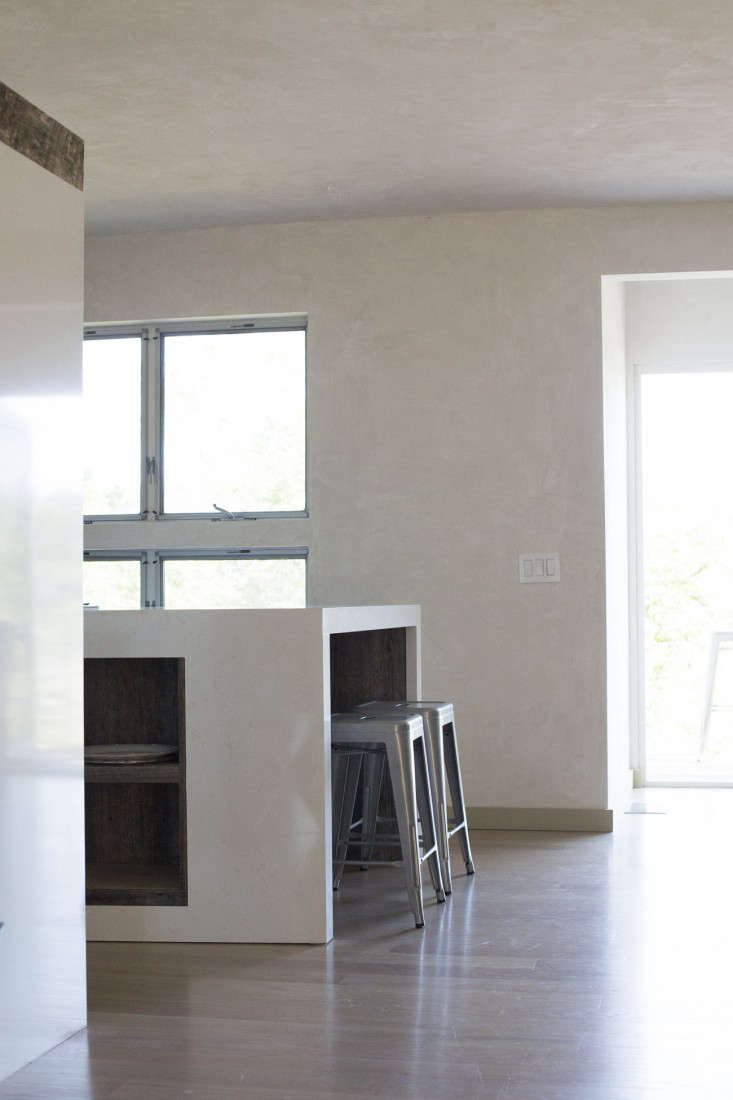 Above: Roché extended the island 18 inches into the living room area so the kitchen feels more generous and connects the living and dining area. The walls are covered with paint impregnated with sand to achieve the look of plaster on a budget: Ralph Lauren’s Crested Butte was mixed with white sand, then troweled on to create a textured look. 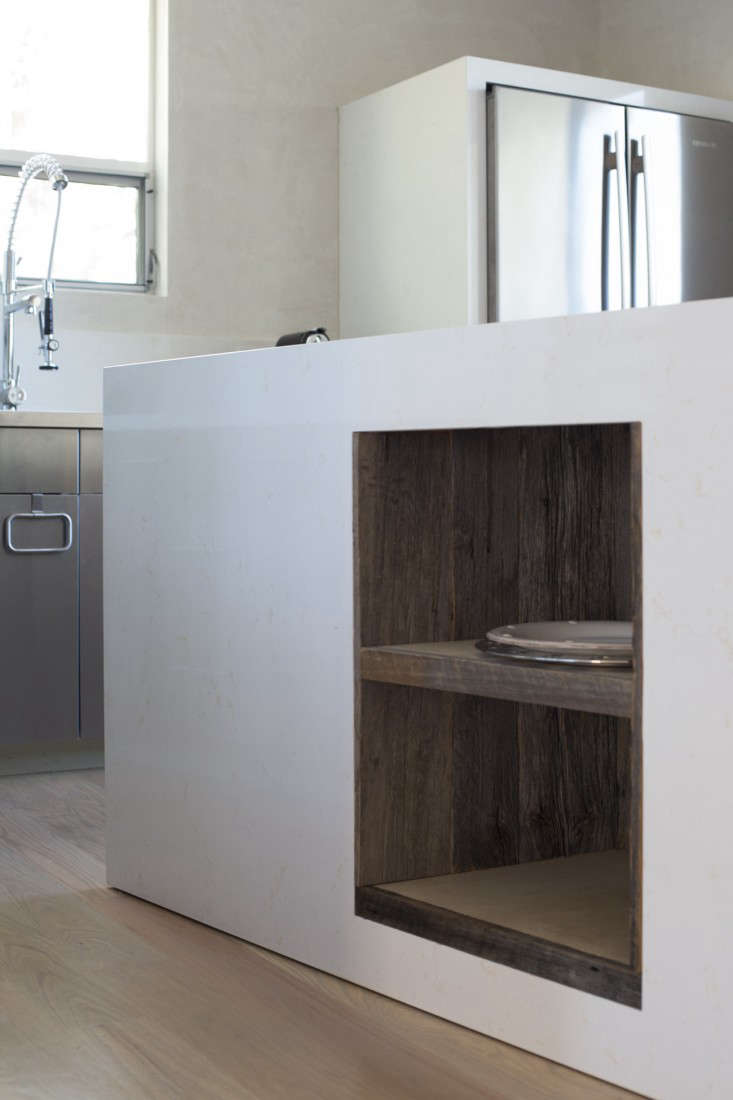 Above: A three-and-a-half inch frame was used on the counter to make it feel like a “chunky island”. The shelves are lined with reclaimed barn siding sourced online from Pioneer Millworks. 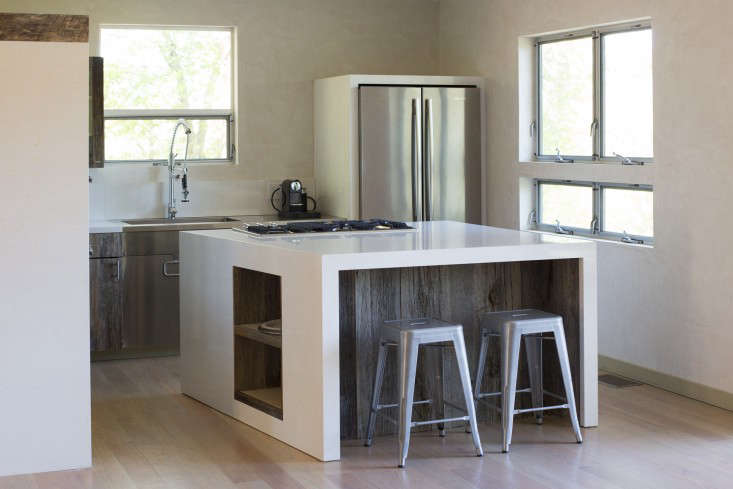 Above: With the exception of one splurge–a state-of-the-art commercial dishwasher that washes glasses in minutes–all ofthe appliances are by Jenn Air, another detail from the Bures’ prior house that they had like and found reliable. “Why reinvent the wheel?” asks Roché.

For more Ikea upgrades, see how an LA couple created a SemiHandmade Ikea Kitchen Remodel and read about Superfront, an online shop specializing in fronts, handles, and legs for Ikea products. And have a look at other inventive uses of Reclaimed Wood, including a Potting Bench on Gardenista.

Finally, get more ideas on how to evaluate and choose kitchen cabinetry and hardware in our Remodeling 101 Guide: Kitchen Cabinets & Hardware.

The Derelict Furniture Co. of Estonia

California in Cambridge: A Boston House Remodel By Barbara Bestor and Carter Design