London architect Johnny Holland believes that the key to a successful project is a clear brief from the client. But what if the client insists that the entire back wall of the house be removed?

A creative couple in Notting Hill asked Hackett Holland (a member of the Remodelista Architect/Designer Directory) to extend and transform their “dark and pokey” kitchen into a simple, functional space with abundant natural light and clean lines. Undaunted by their mandate to remove the entire rear wall (including structure) in order to provide the widest opening possible for a glazed door system, Holland called on the services of structural engineer Nick Maclean, who “rose to the challenge without complaint” and designed a beam that would span the full width of the house while supporting the bedroom above. “The result is a seamless transition between the kitchen wall surface and garden wall outside,” says Holland, “all painted in white to complete the effect.” 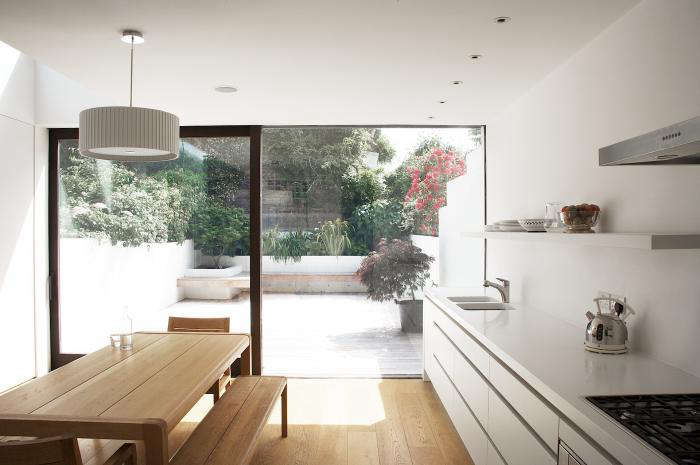 Above: “At ground floor level we extended the kitchen space into the side yard,” Holland says. “The footprint of the original yard is reflected in a single large strip of frameless glazing, almost flat, flooding the space with natural light.” The effect of the frameless glazing is that the garden wall extends continuously from the kitchen interior beyond the glazed door system. 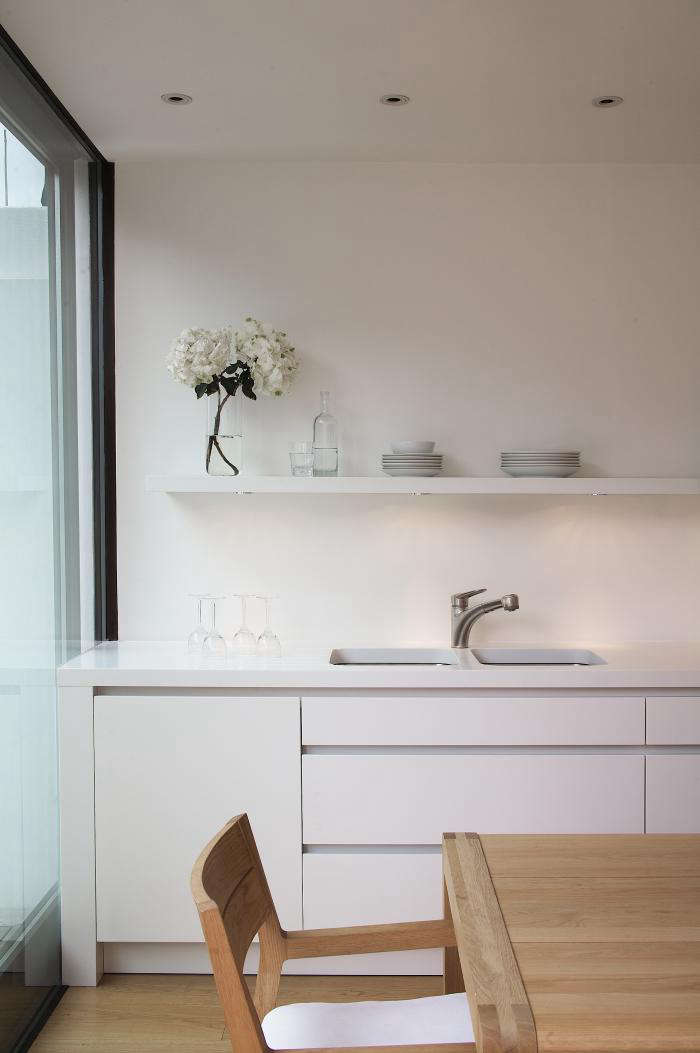 Above: “We were able to introduce a builder who was capable of the high level of finish and attention to detail required for a scheme of this nature,” says Holland. “When it comes to what might be broadly described as ‘minimalism,’ every detail assumes significance.” 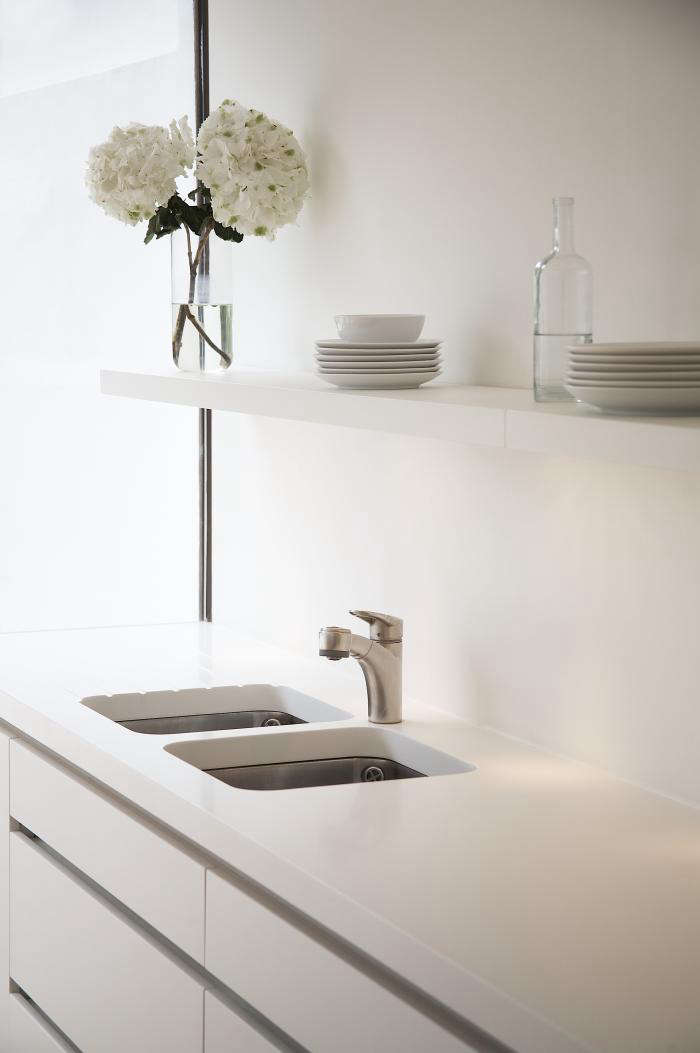 Above: “Every event is noticed: whether the junction between a wall and floor, the exact alignment of cupboard doors, the mitered corners on a shadow gap detail,” says Holland. “There is no room for error. ‘Less’ really does become ‘more,’ as precision is everything.” 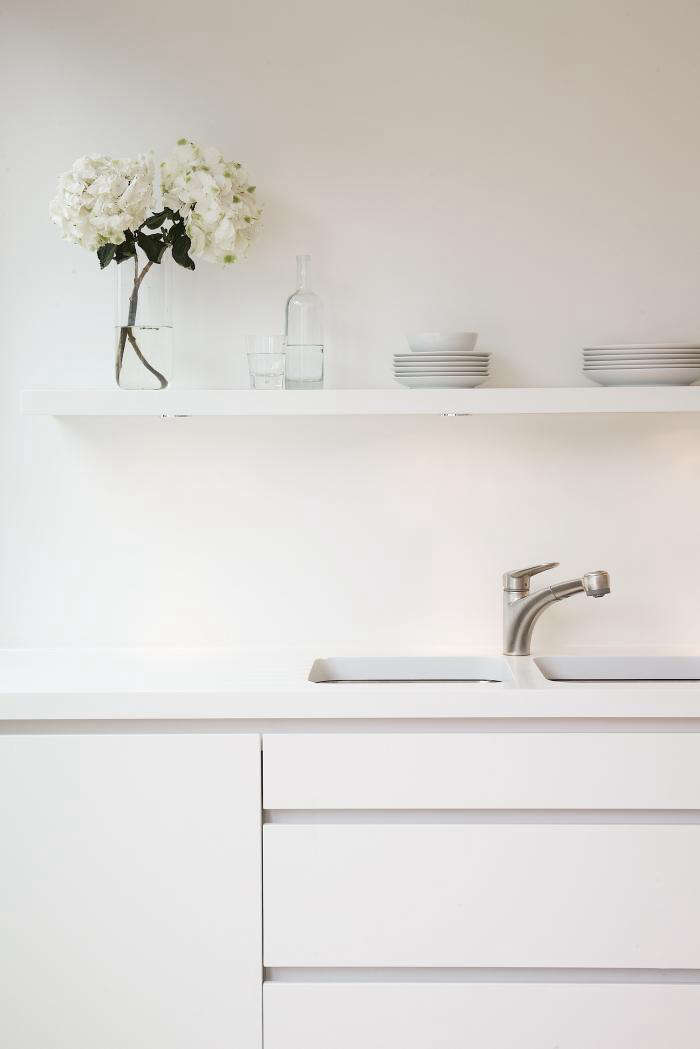 Above: “The whiteness of the bespoke kitchen units was matched by a pure white Corian work surface and Corian shelves,” Holland says. “There is no conventional back splash: An acrylic sealer has been applied to the paint work, which will require refreshing periodically, subject to damage.” 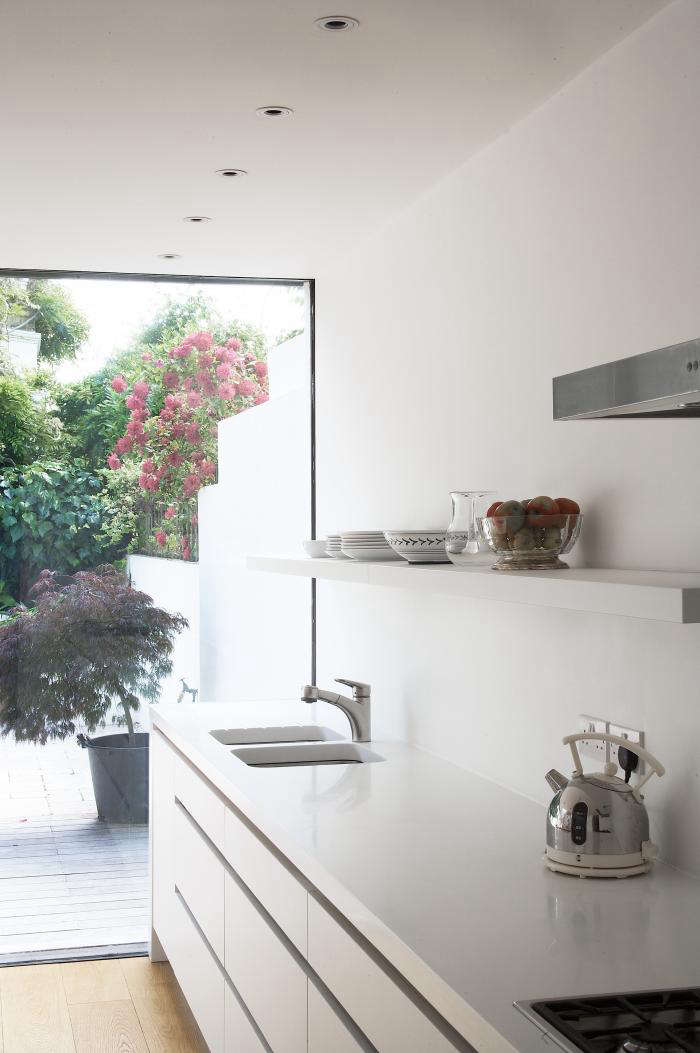 Above: The glass is supported in metal channels recessed into the wall above and sealed with structural silicone. 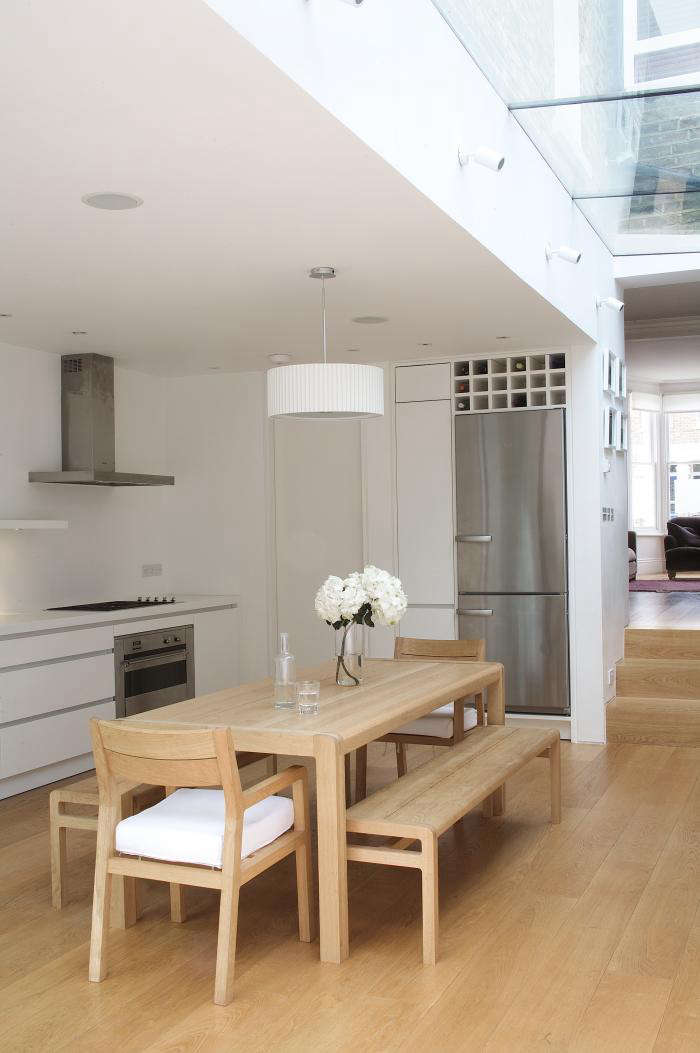 Above: “Lighting is consciously simple. A row of recessed down-lighters illuminates the kitchen counter; a pendant glows softly above the kitchen table; and the bookshelves are illuminated by white spotlights mounted on the roof light return wall opposite,” says Holland. “A discrete floor box below the kitchen table provides power and a data connection for laptop use, avoiding the hazard of draping cables across routes around the room.” 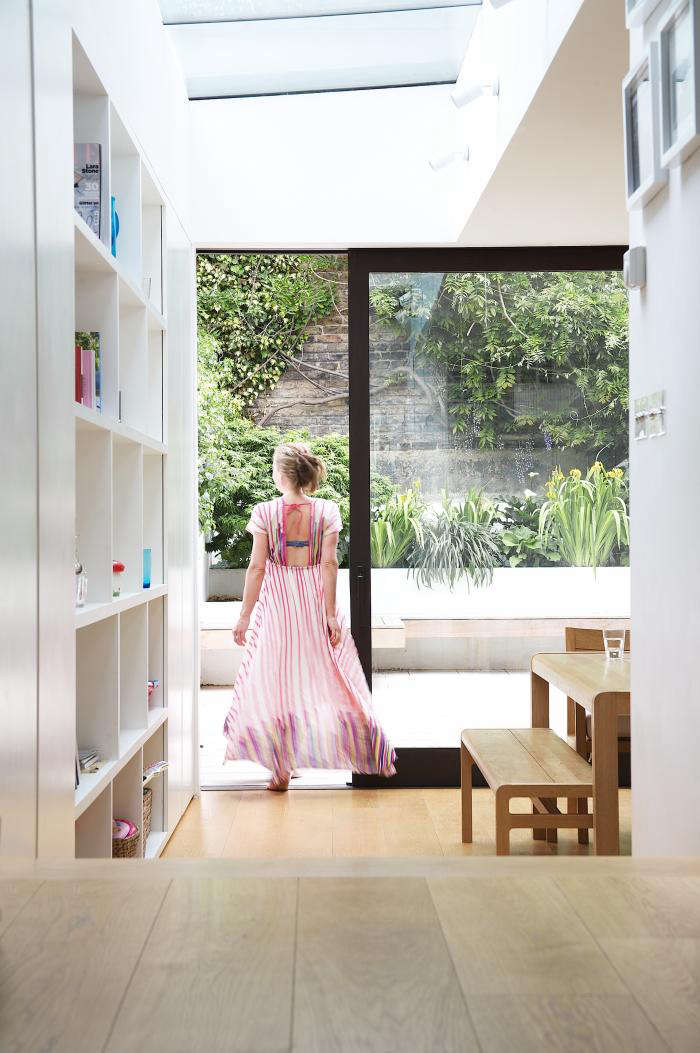 Above: “At ground floor level, natural oak was selected for the floor finish throughout, which unifies the spaces seamlessly,” Holland says. “As always, there was some debate about the use of timber boards in the kitchen: water damage, spaghetti in the cracks, grit from the garden, and general wear and tear were all debated. Conversely, this was a case where the client persuaded the architect that timber would be all right.” 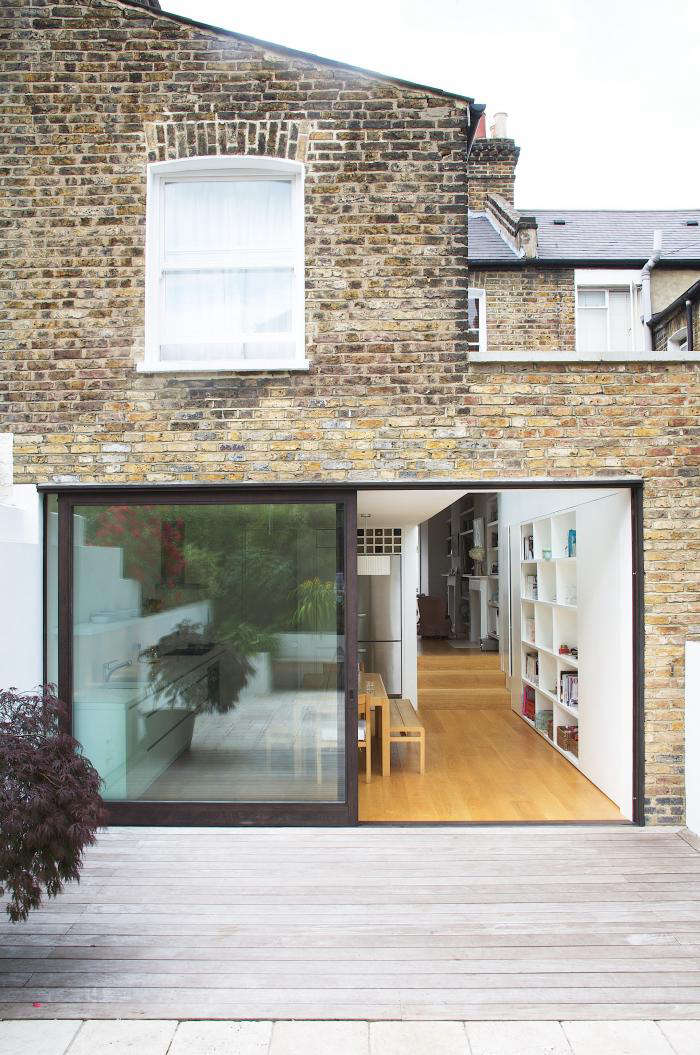 Above: Creating the largest possible opening meant removing any existing supporting masonry and the newly inserted beam had to be supported on the shared (with neighbors) Party Wall. “This presented the additional headache for Nick, who had to ensure that the Party Wall would accept the hugely increased load without cracking–particularly on the neighbors; side,” Holland says. 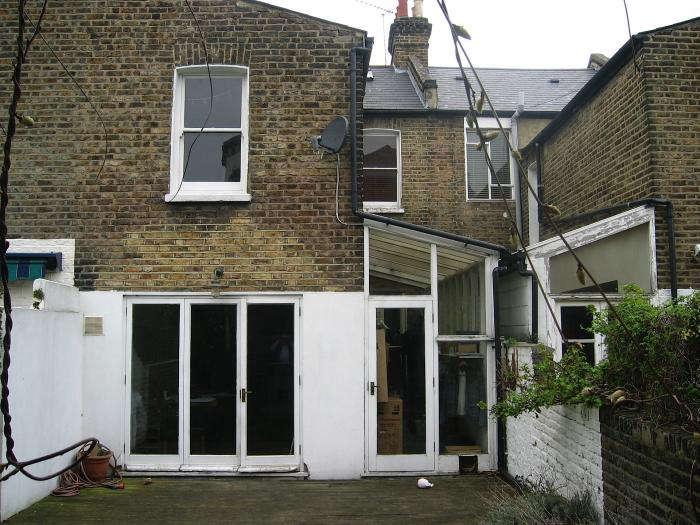 Above: The original rear wall of the kitchen. 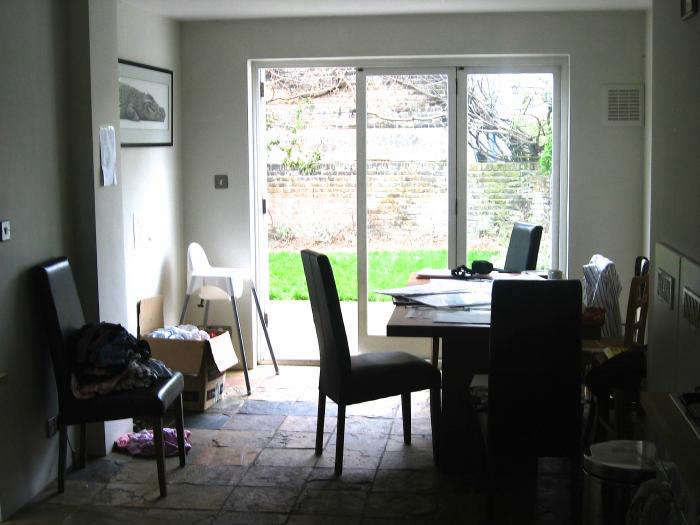 Above: The original “dark and pokey” kitchen prior to its transformation. 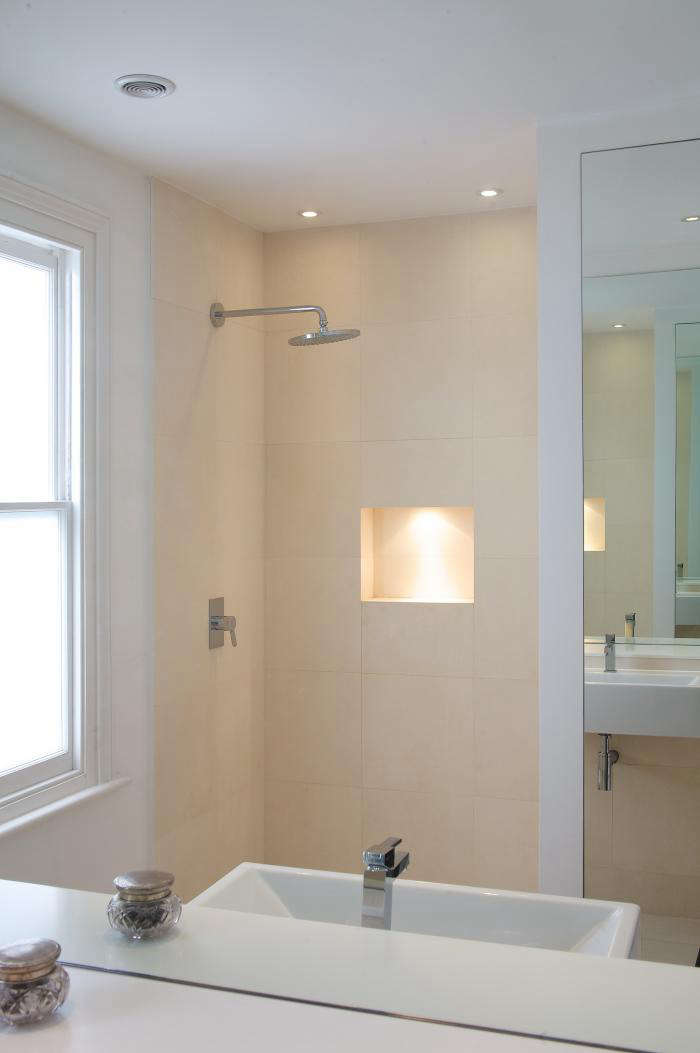 Above: “Upstairs, we rearranged the partitioning of the rear addition, stealing a little space from the rear bedroom to enlarge the shower room,” Holland says. “Although still small, the shower room is made serene and calm by complete removal of all superfluous detail and clutter.” 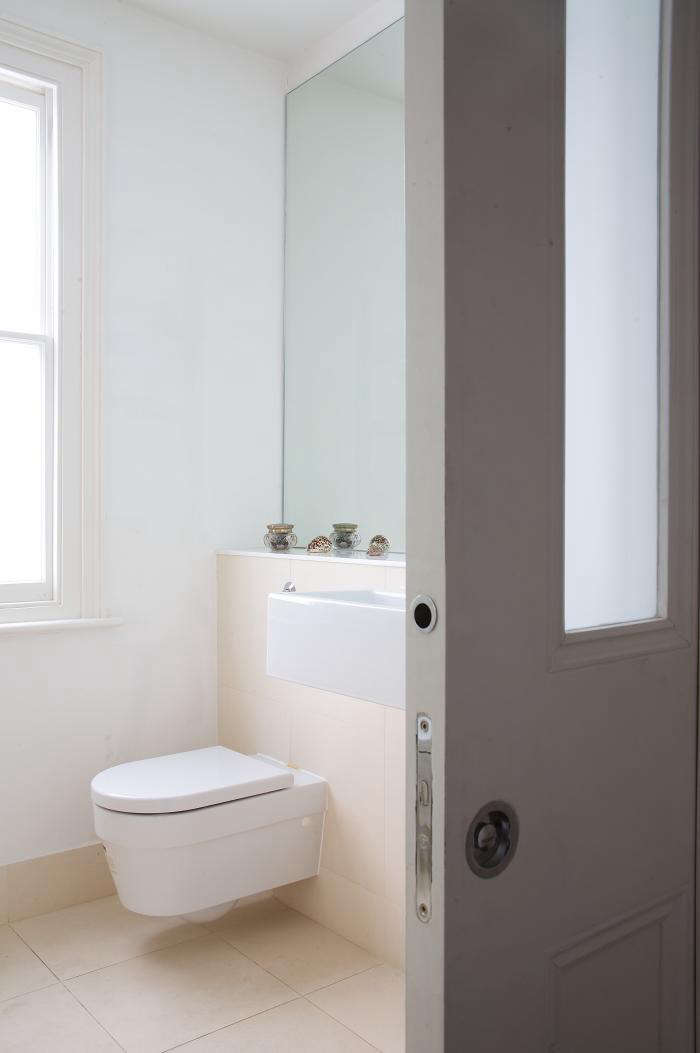 Above: A tall mirror-fronted cabinet houses all toiletries. Both WC and basin are wall-mounted, keeping the floor clear of dirt-collecting corners. Surfaces are flush and the junction between materials is precise and neat. The bathroom is accessed through a pocket sliding door. 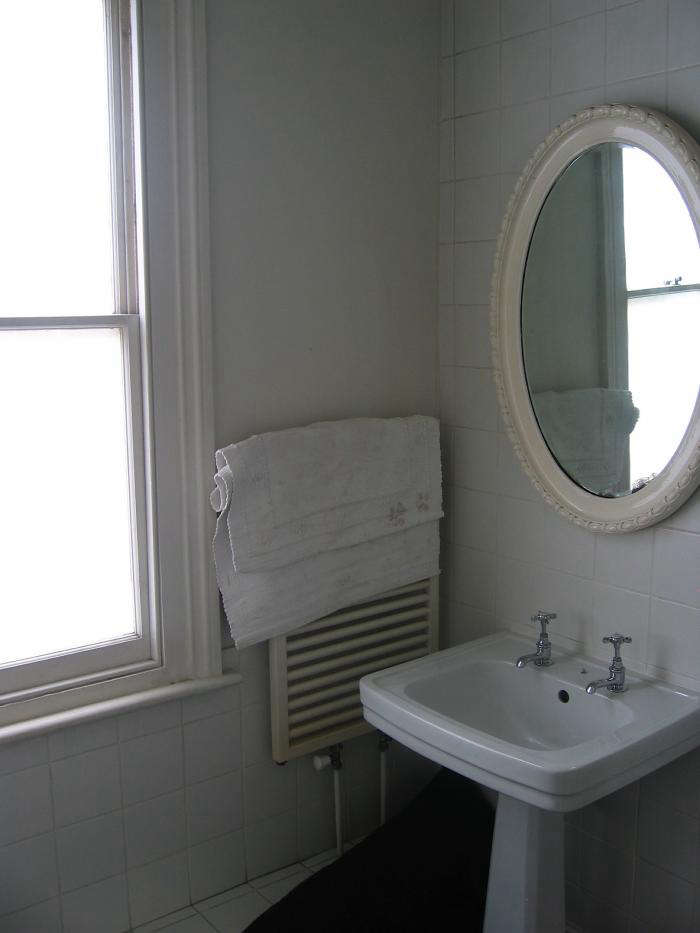 Above: A view of the original upstairs bathroom.

N.B. White kitchens are classic and timeless. See 4,714 images of White Kitchens in our Gallery of rooms and spaces for more inspiration.

Atomic Garden: A One Stop Shop in Oakland, CA