When Julie and I head to LA to check out the design scene and visit our favorite haunts, our inevitable first stop is Joan’s on Third, which you might describe as LA’s answer to Dean & Deluca. Over the years, we’ve gotten to know Joan (she’s a Remodelista reader, perusing our newsletter every day and calling us on our cell phones when she’s got something to say).

Joan has lived in an industrial chic loft a couple of blocks from Joan’s on Third for nine years (the ultimate walk-to-work situation). The store predates the loft– in 1995, Joan began what started as a small catering business when West Third Street was not yet a destination. Although a West Coaster now, Joan McNamara grew up in New Jersey in a Czech family, and learned to cook from her mother–by the age of eight she could whip up a full dinner. Her early working years in New York combined her two passions: design and cooking. She was the office manager for modern furniture and industrial designer Paul McCobb and then went on to work for Dione Lucas, the noted English chef who was the first female graduate from Le Cordon Bleu. (She tells us that Dione taught her the secret of a great pie crust, “it’s all in the fingers.”) Her restaurant and loft share a similar look: clean, neutral tones decorated with plenty of antique and vintage finds. As Joan tells us, “I’ve collected so many special things over the years. I love antiques shops and flea markets.” 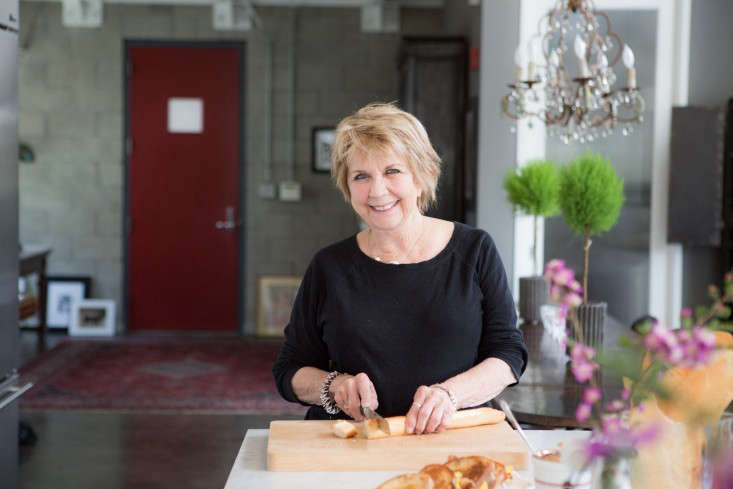 Above: Joan, always clad in black, at home in her loft. Her favorite pastimes? “Reading cookbooks, making lists, and baking bread on a rainy day in my loft.” 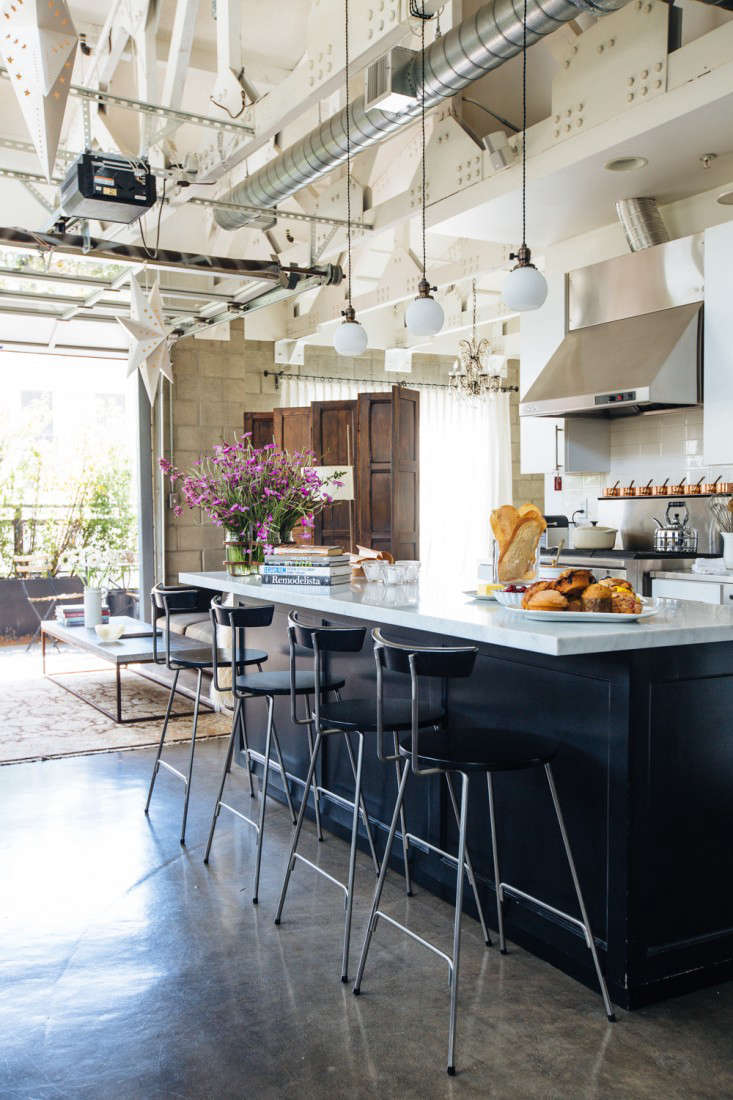 Above: The marble-topped kitchen island. Joan prefers a neutral palette of white walls, gray concrete floor, and warm dark wood tones. Colors come from “family photos of children and grandchildren, fresh flowers, my cookbooks, and food in the kitchen.” 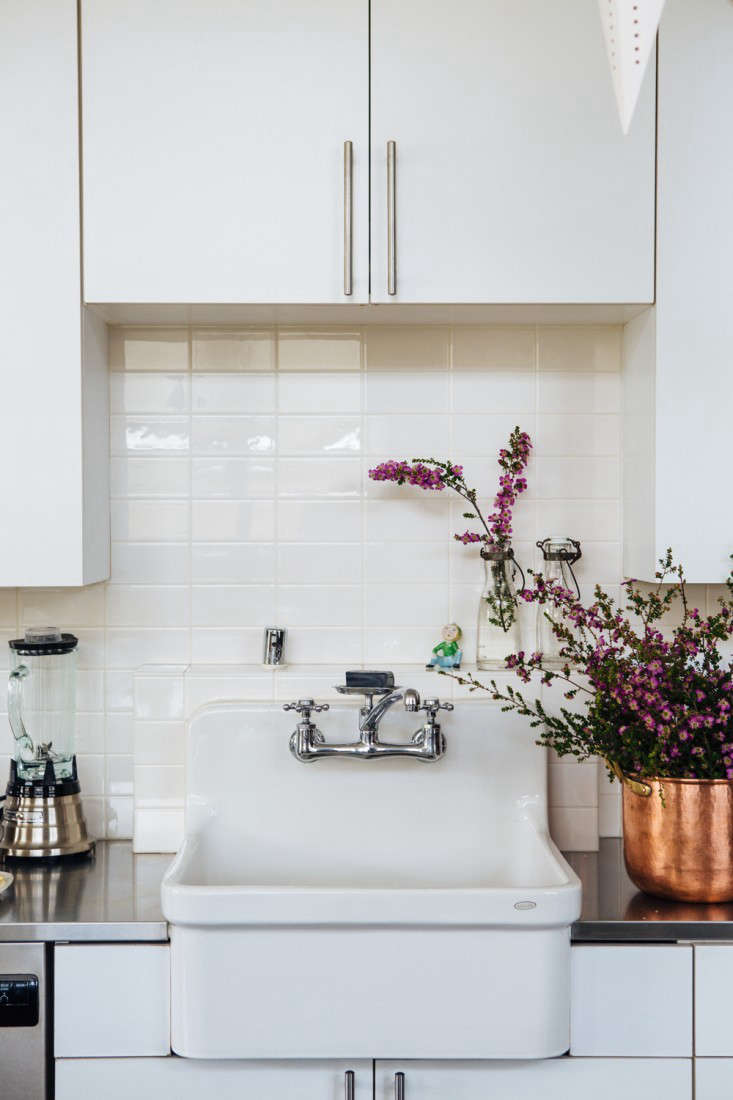 Above: Joan counts a white farmhouse sink as one of her kitchen essentials–this one is a Kohler Gilford. Other crucial elements are her mother’s wooden spoons, an omelette pan, and an original design Kitchen Aid mixer in white. 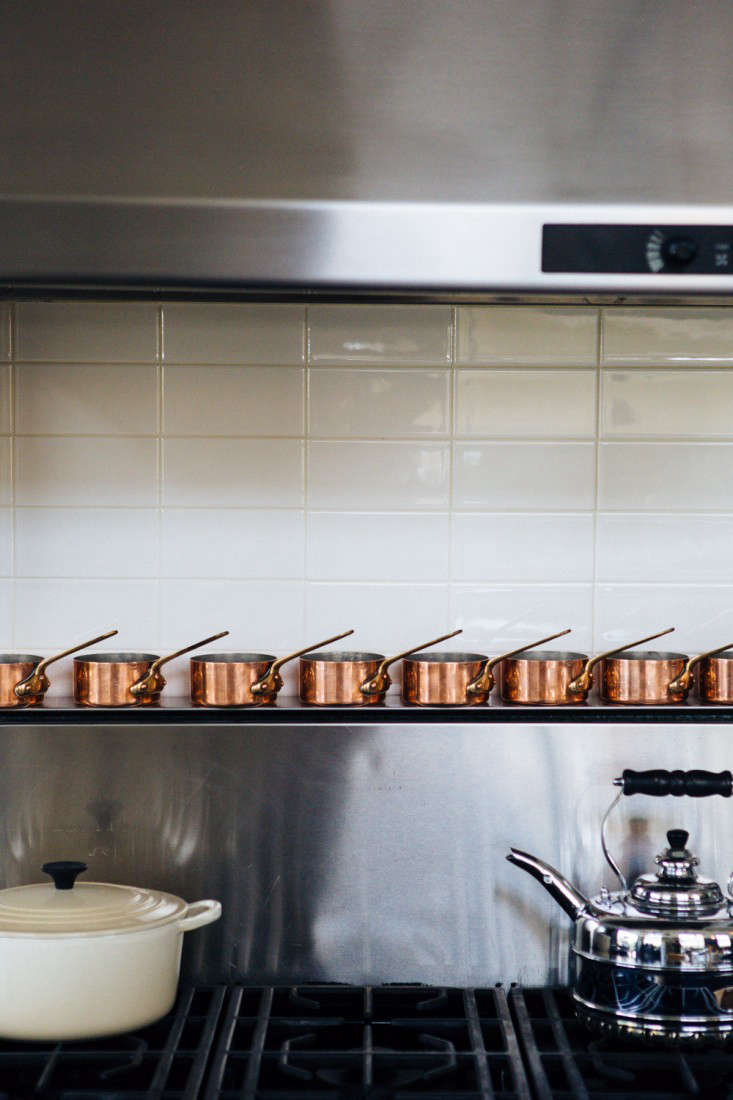 Above: A row of copper pans lined up on a GE Monogram stove that came with the loft (industrial Wolf ranges are what she has at her store). “Cooking at home is something I love to do whenever I’m not at work. Sometimes I experiment with new ideas and bring them to Joan’s on Third.” 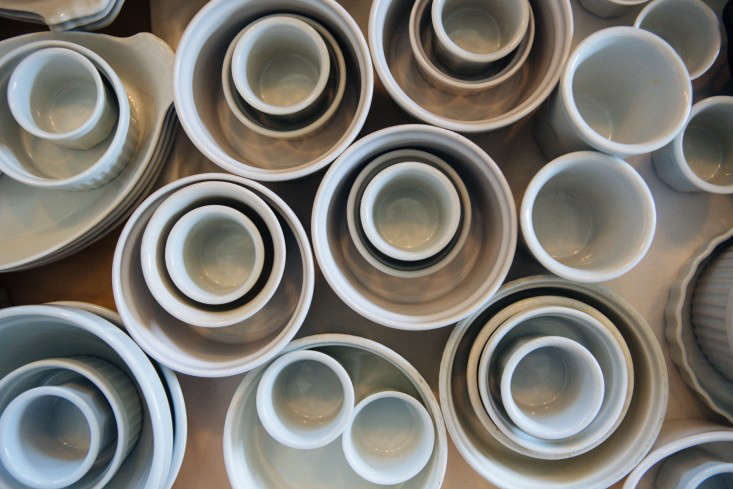 Above: A drawer full of white ramekins used for cooking sessions with friends. Joan explains, “At home, I love to entertain and host the Spoons, a wonderful cooking group that I’m a part of. We’re a group of professional chefs who get together about once a month to cook together and chat and drink wine.” 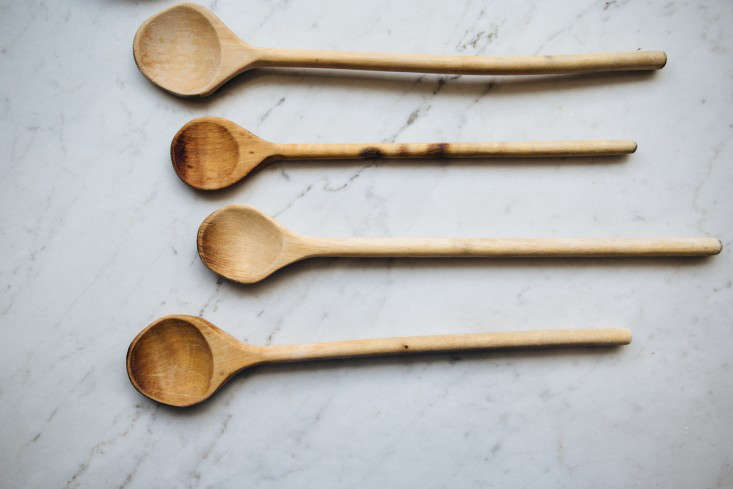 Above: Hand-carved wooden spoons, passed down from her mother. 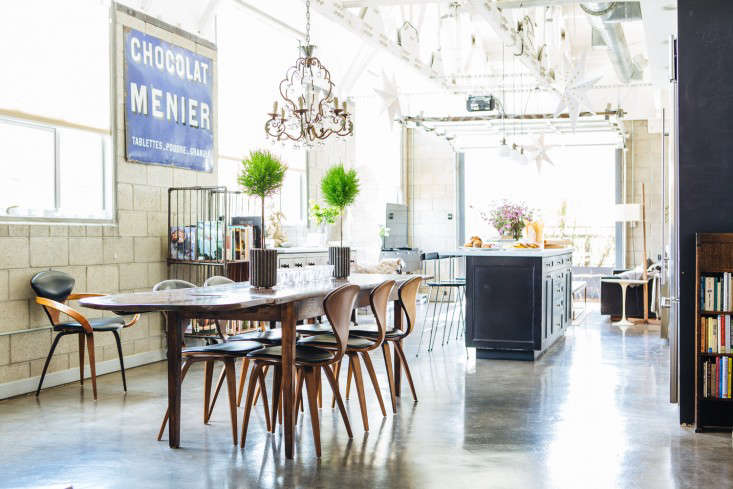 Above: The dining table is from Bourgeois Boheme in LA and Joan believes it was originally a wine maker’s table. It’s extremely narrow–29 ½ inches wide, which Joan says is ideal for conversation–and 11 feet long. She had the dimensions replicated for a communal table in the marketplace at Joan’s–and made that one even longer. The Cherner chairs are a mix of some originals (from Joan’s parent’s kitchen, designed by Paul McCobb) and some contemporary replicas. She points out that the legs on the old ones are about an 1/8th of an inch thinner than the contemporary ones. 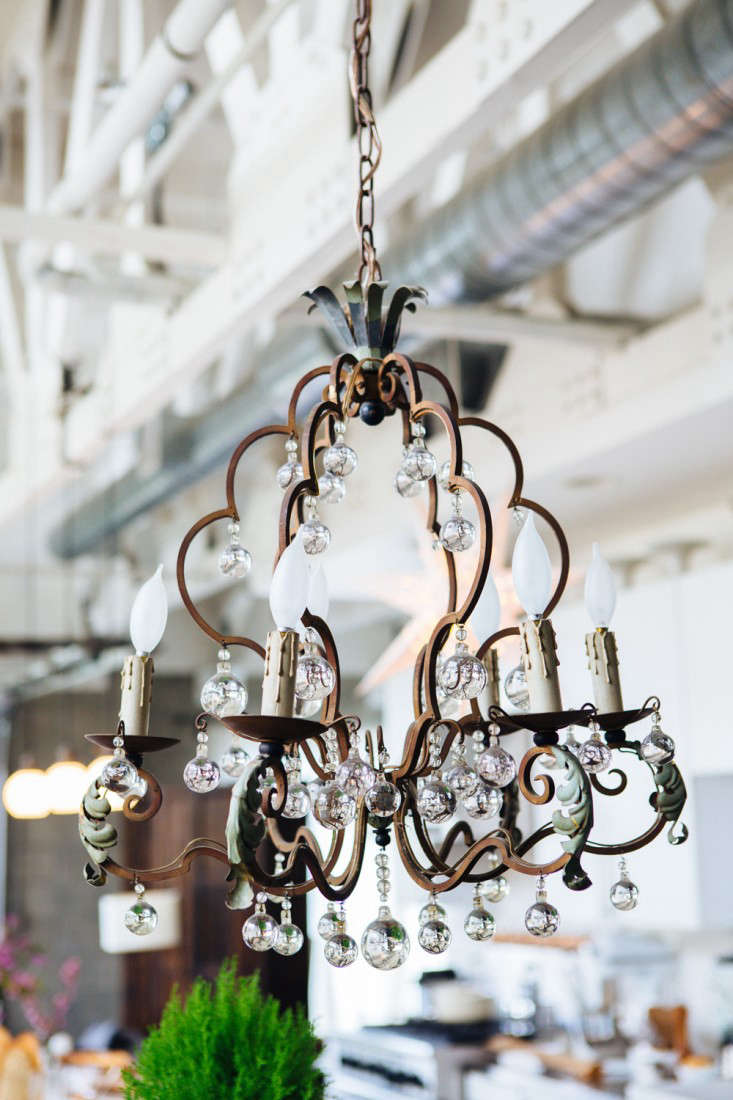 Above: The chandelier above the dining table came from a trip to the UK–“I bought three there for the price of one here,” she tells us. She often buys for both her store and her loft; “the two spaces go hand in hand.” 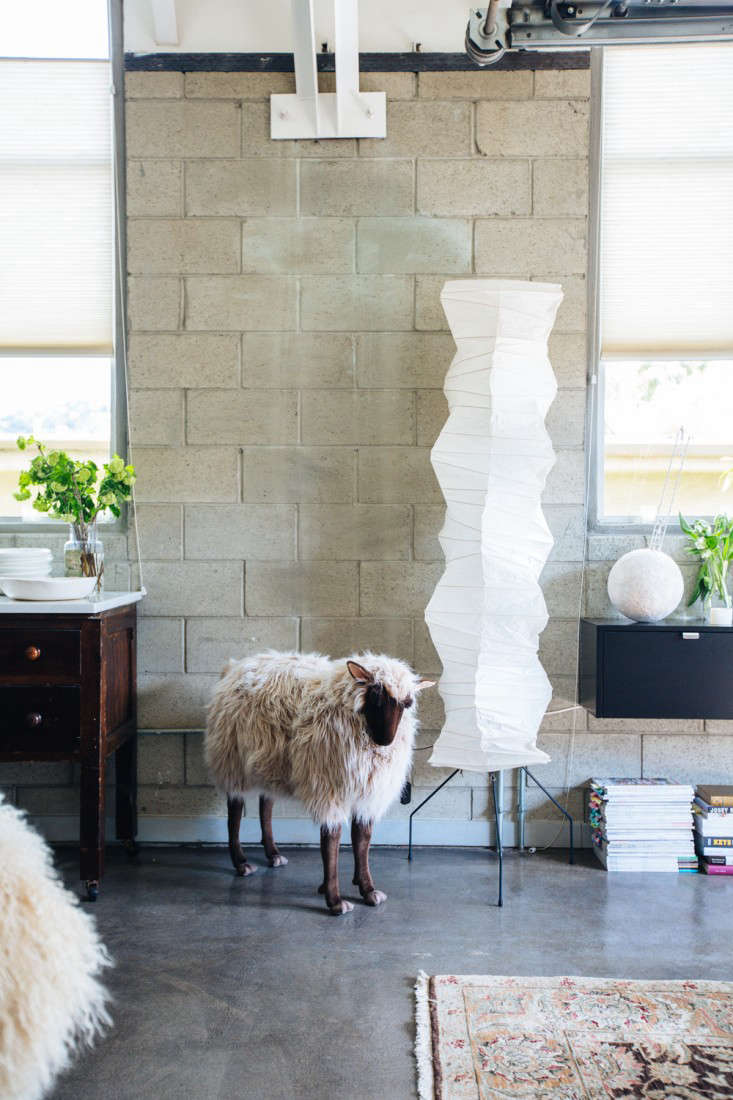 Above: Joan collects cows and sheep, a love born from visiting farms. They can be spotted all over her apartment. Seen here is a Gentle Ewe Sheep Ride On, a Christmas present from her two daughters who work with her. 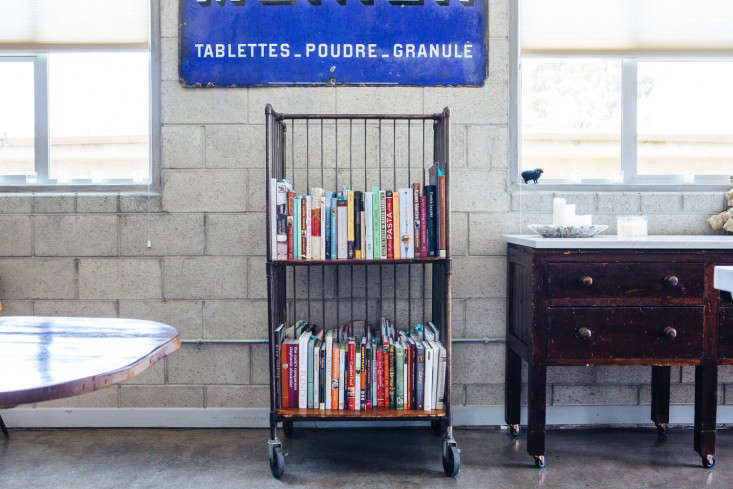 Above: An old baker’s trolley is used for storing part of Joan’s vast cookbook collection. 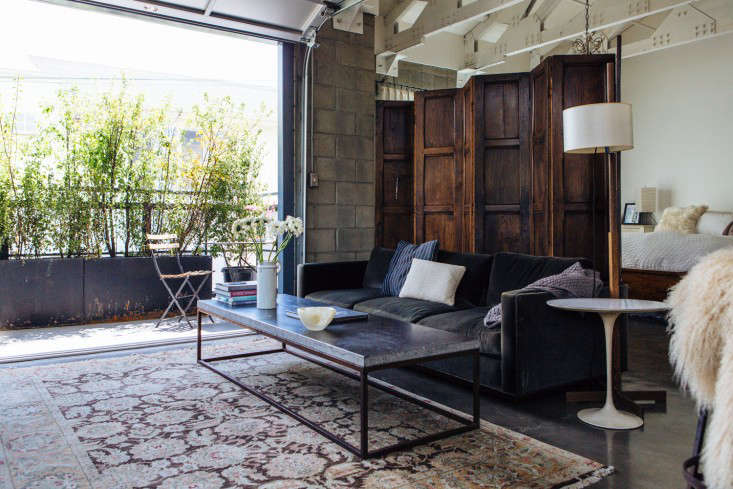 Above: A garage door opens to a balcony and fills the loft with light. An antique wooden screen divides the bedroom from the living room. 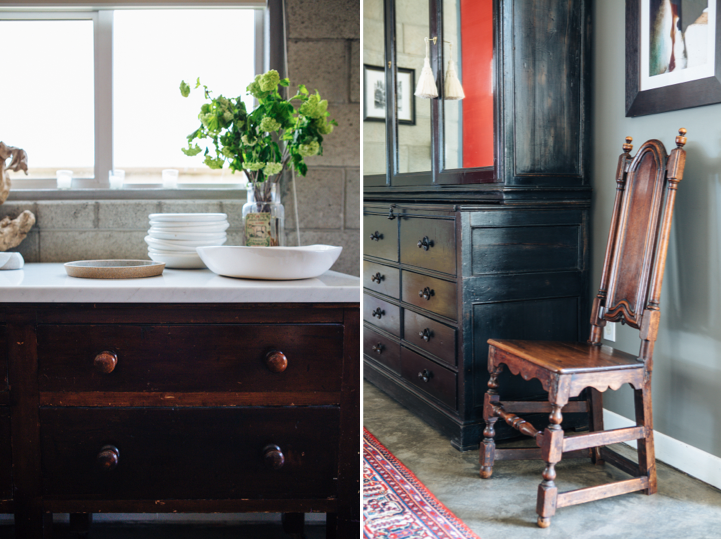 Above L: Next to the dining table, Joan stores tableware in an antique sideboard that she topped with a marble counter. Above R: An Italian credenza from Eccola stands in the entryway. Joan had legs added to it: “As was, it looked like part of a kitchen cabinet.” It’s filled with silver that Joan has collected over the years and inherited from her mother. She also has deep holdings of antique table linens–things she buys on trips with a friend to France, lots of them with the flea market tags still on. 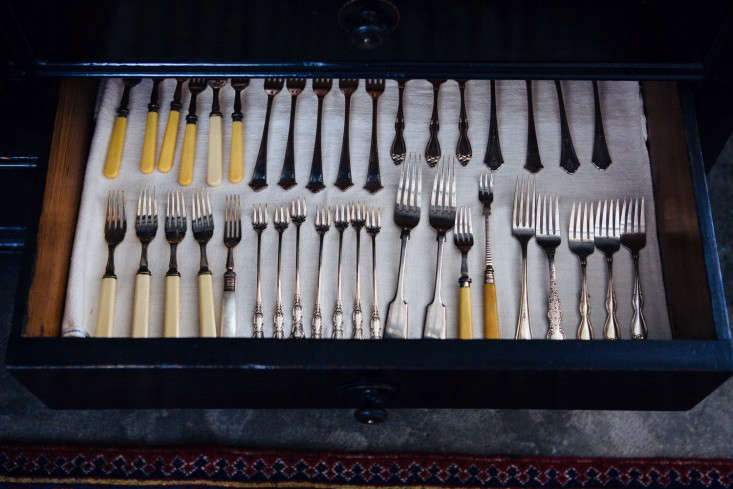 Above: A drawer full of silverware in the credenza. She likes to shop the Paris flea markets; Isle Sur la Sorgue in Provence is another favorite source for antiques. 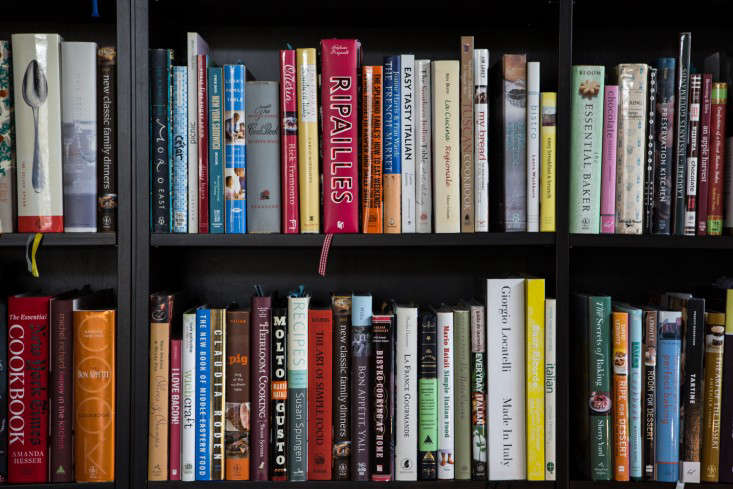 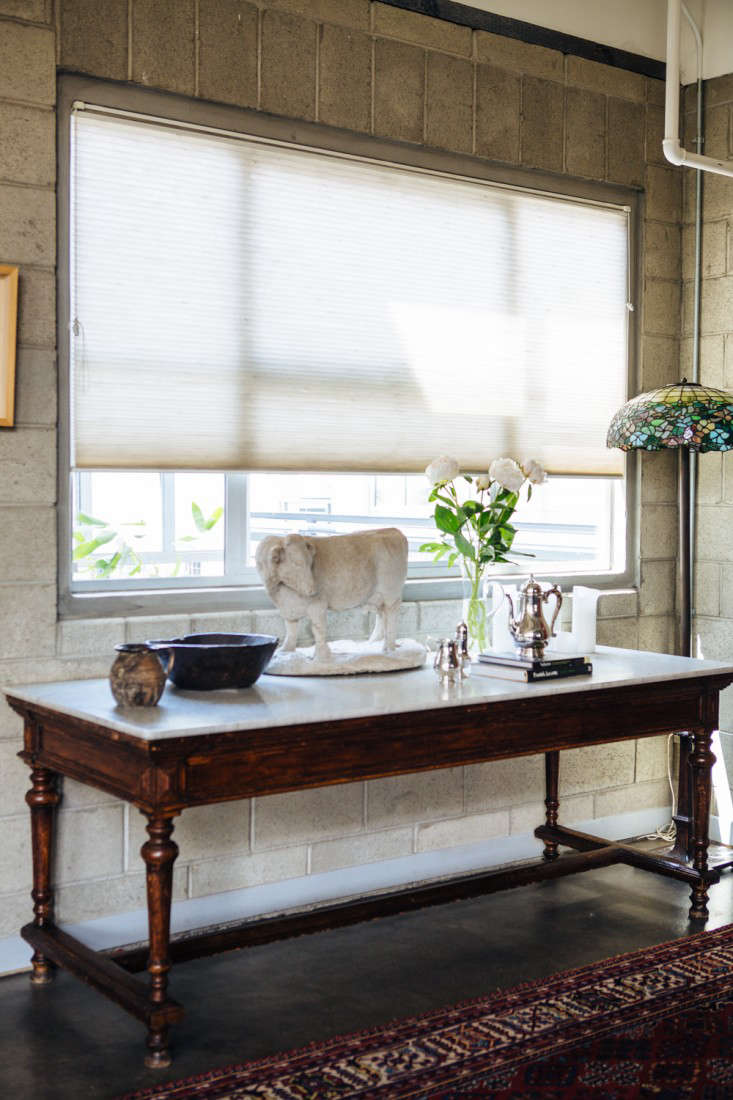 Above: A marble-topped candy making table stands opposite the credenza in the foyer. 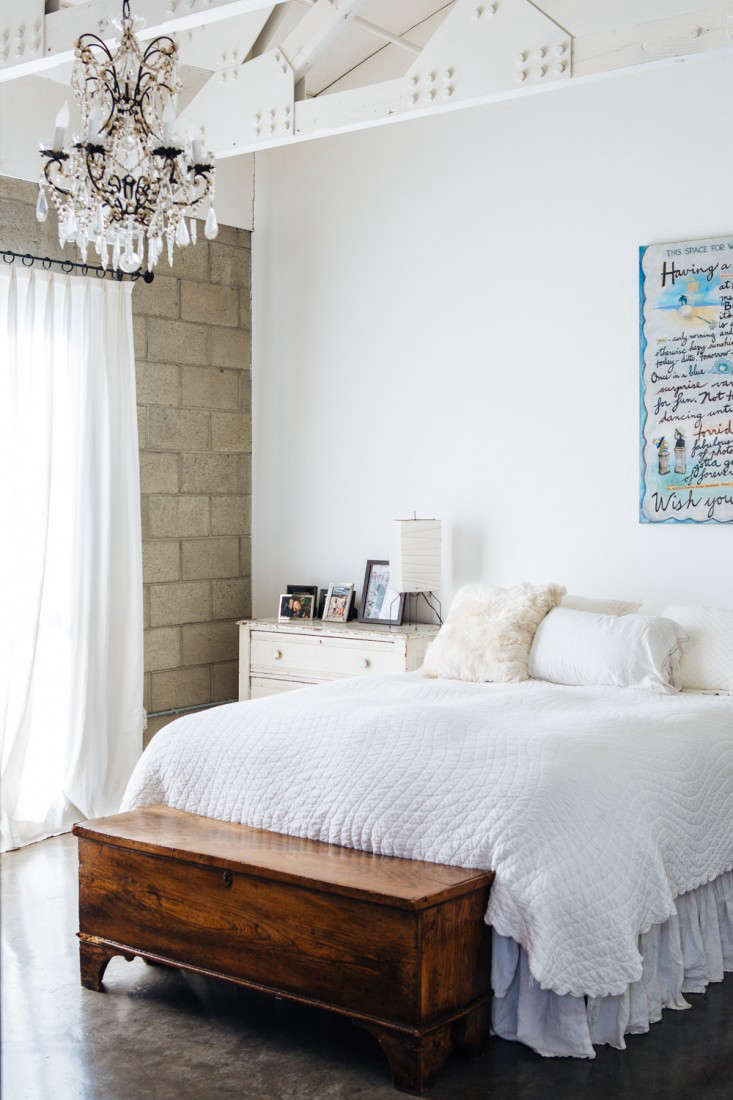 Above: The all white bedroom. 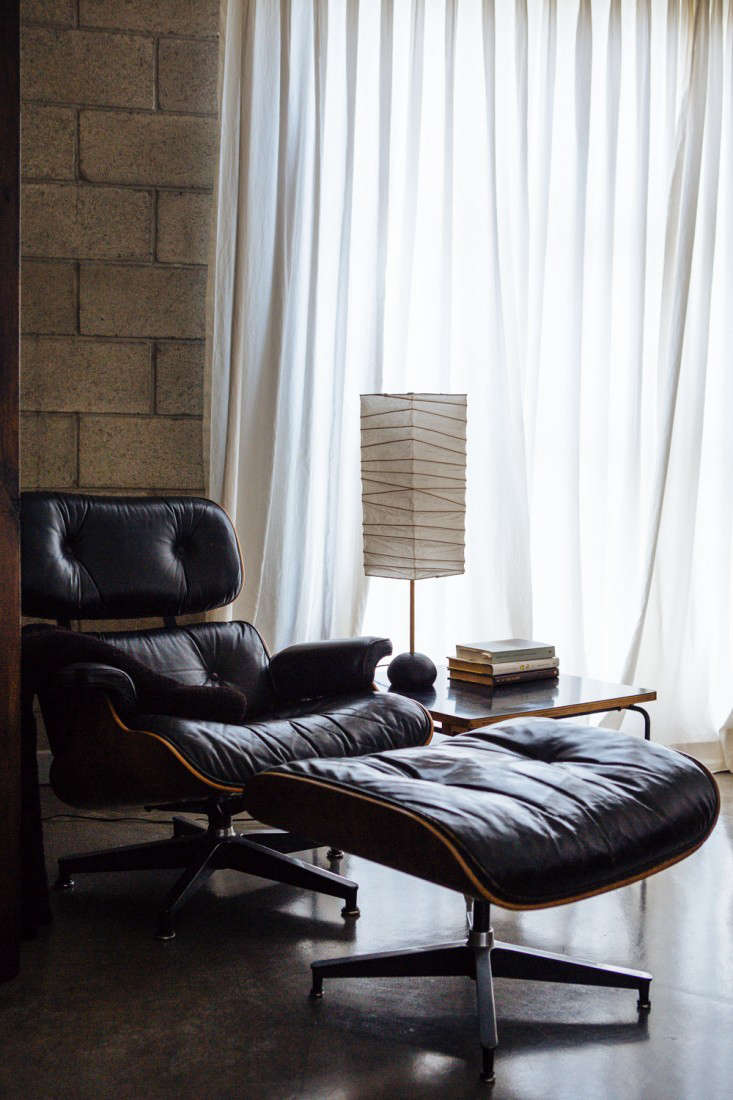 Above: An Eames lounge chair and Noguchi lamp in a corner of the bedroom. 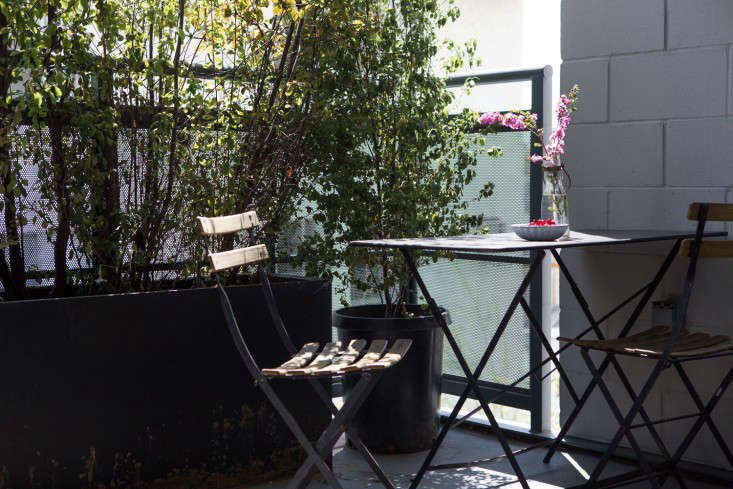 Above: The balcony has a French bistro table and folding chairs. Mornings begin with the garage door open all the way for fresh air, and again in the evenings when guests to give the loft an indoor/outdoor feel.

See our prior posts on Joan’s on Third and our Steal This Look on the Perfect Powder Room at Joan’s on Third. For another LA House Call, see our post on the home of Eccola owner Kathleen White Almanza.