Cinema Sil Plaz was born out of necessity. When the last cinema in the Alpine town of Ilanz, Switzerland, closed down over 20 years ago, resident moviegoers banded together to form their own film club. The club’s 300 members were constantly on the lookout for places to screen movies, and after several years of screening in makeshift locations, the idea of having a permanent home for a new theater began to take hold.

In 2004, club members discovered a former 19th century forge that had recently become vacant. Using a mix of local and imported materials, film club members and local architects Ramun Capaul and Gordian Blumenthal created an inviting, minimalist movie theater that has become a cultural hub for the inhabitants of the surrounding Surselva district.

What can’t be conveyed through photographs are the sensory details that add to Cinema Sil Plaz’s charm: the smell of aged leather and raw wood, the feel of the waxed rammed earth floor and untreated walls, and even the occasional (unintended) sound of church bells ringing from next door, sometimes right in the middle of a movie. 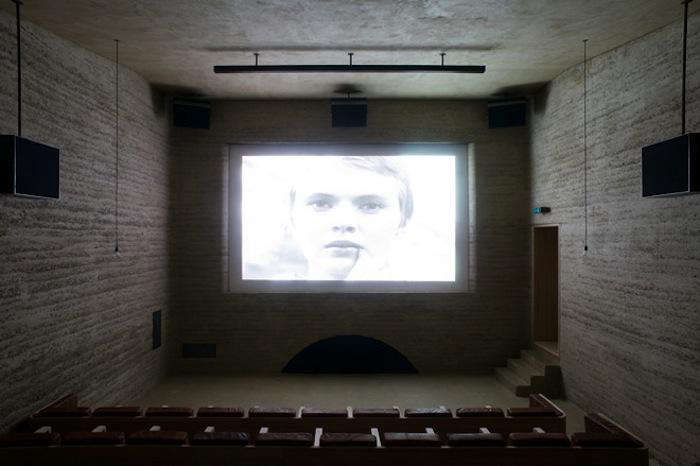 Above: Cinema Sil Plaz opened in the fall of 2010 with a screening of Jean Luc Godard’s Breathless. The screening room is made of rammed earth. 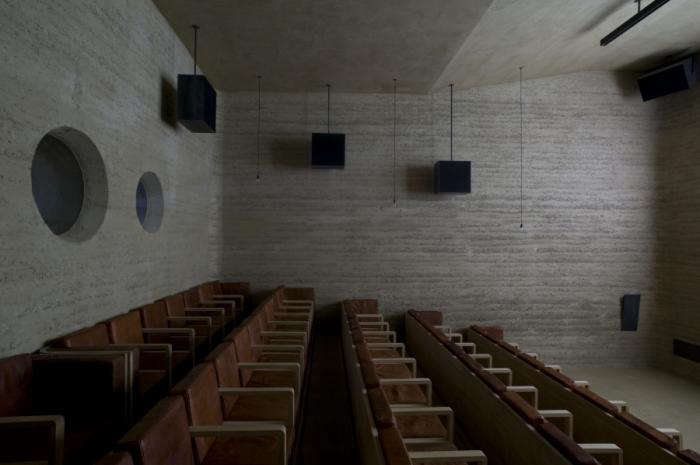 Above: The earthy hue of the theater’s 52 seats contrast with the stark black speakers and spartan light fixtures. The seats were made locally with an oak hardwood frame. And while the architects express a preference for local materials, the sheep leather they chose for the chairs was sourced from Marrakech. 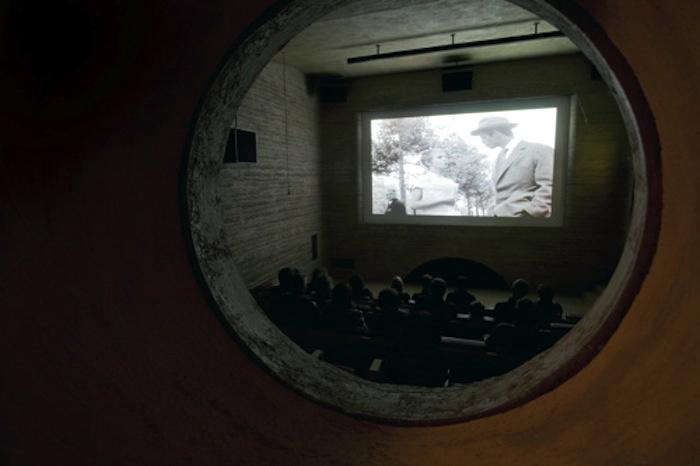 Above: A porthole provides a view into the screening room from the projectionists’ room. Photograph from Foundation Pour L’Architecture. 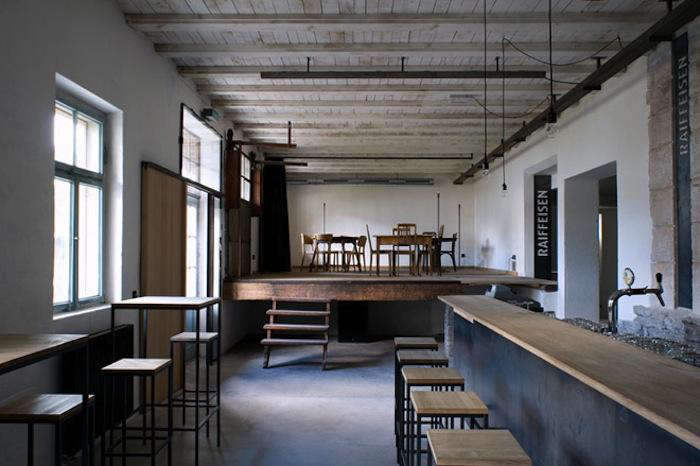 Above: Intermission during movies is regularly observed in the theater’s upstairs bar, which was designed to encourage lingering. A raised wooden stage houses vintage tables and chairs on movie nights where moviegoers can sit to enjoy drinks and snacks. On nights when there are no screenings scheduled, it’s also where bands perform. 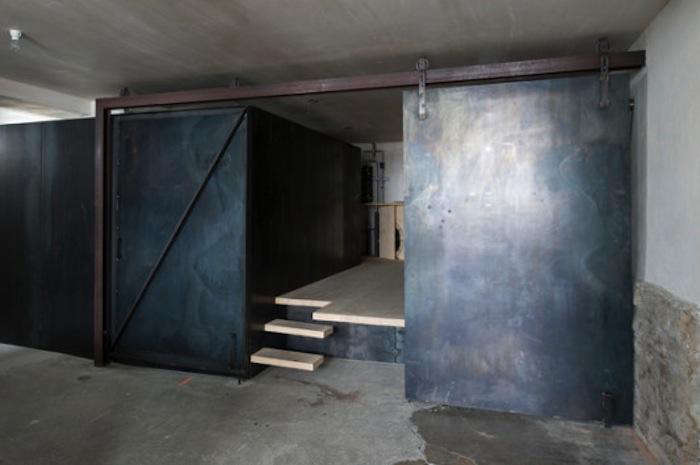 Above: A sliding barn door made of steel opens into the bathroom. 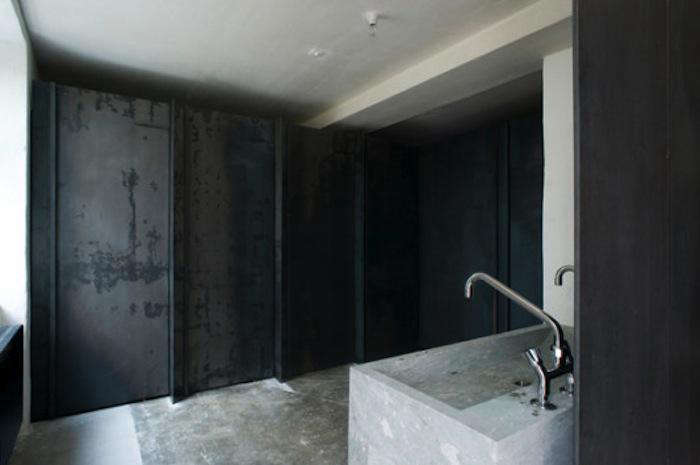 Above: The bathroom just off the theater’s bar. 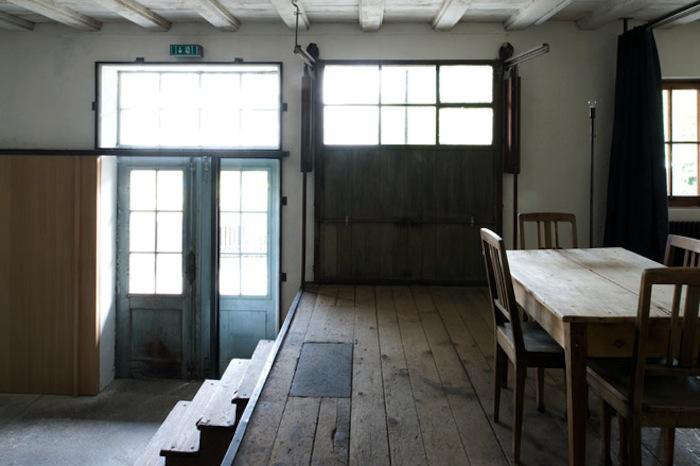 Above: A raised wooden stage houses tables and chairs on movie nights. Bands perform on this stage on nights when there is no movie scheduled. 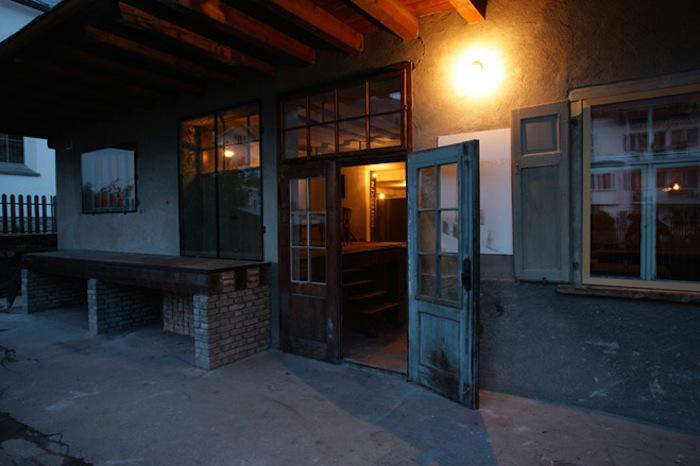 Above: Cinema Sil Plaz is located at Via Centrala 2 in Ilanz, Switzerland.

For more about rammed earth, see our post: Rammed Earth House by CCS Architects. Interested in a similar look? See more posts on Concrete in our archive. Like classic French films? See our post on Truffaut-Inspired Colored Carnations.

Kitchen of the Week: ‘A Secret Retreat’ Above a Violin Store