The Challenge: As avid cooks, Allison and Peter knew that they wanted to spend most of their family time in the kitchen/dining room situated on the ground level, but the existing ceilings were low and the spaces dark. “My main criterion when searching for a new home was light,” says Allison. “When Peter and I first walked through the crumbling wreck that would become our house, it was a perfect, sunny, early spring day. The backyard was filled with afternoon light, but the gloomy garden level was nearly a deal breaker for me. Elizabeth found a solution that would let the light in while leaving the history and structure of the townhouse intact.”

The Solution: Built in 1852 as a single-family house, the structure had suffered so many years of neglect that its roof and back wall were on the verge of collapsing. Since a replacement wall was required, Roberts took the opportunity to create a problem-solving two-story addition. The resulting double-height (and on the second floor, double-layered) wall of windows includes an indoor/outdoor dining room with the open feel of a greenhouse and a light-filled parlor above. 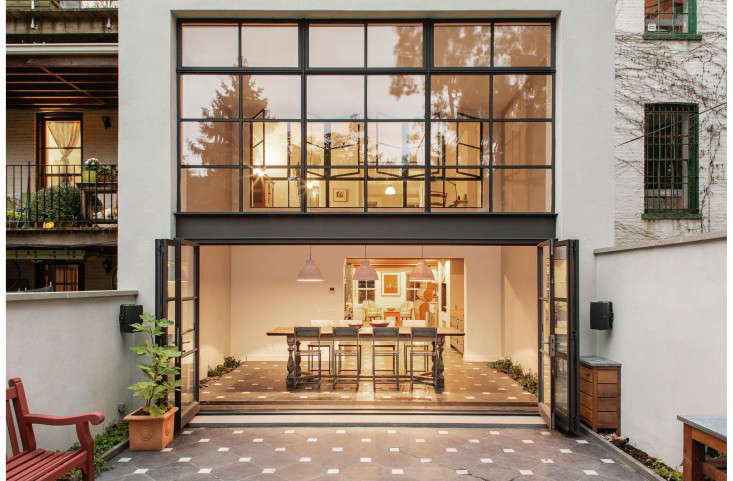 Above: “We opened up the back of the house with a very large, two-story window and door unit–approximately 15 feet wide and 17 feet high,” says Roberts. “Light carries through the interiors to the living room on the second floor.” The perimeter plantings in the dining room are fully plumbed for drainage and are on an automatic drip sprinkler system. Eventually, vines will be visible on the parlor level in as they climb the two-story interior walls, bringing greenery into the heights and depths of the house. 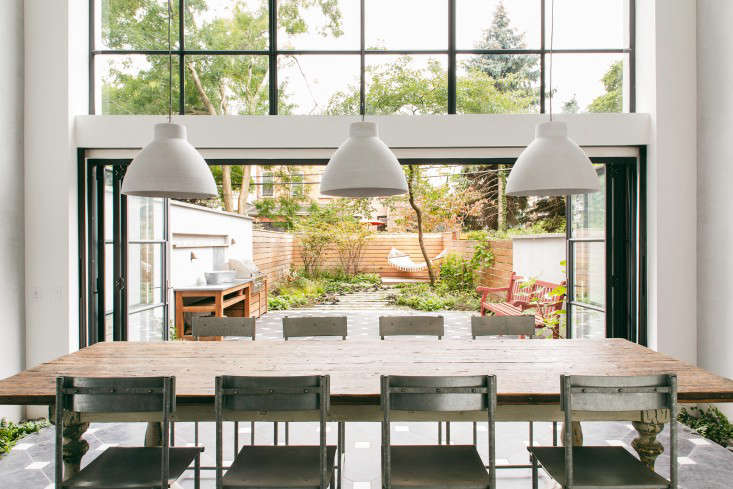 Above: On the ground floor, the entire window slides open to create a double-wide opening to the garden. “Kim Hoyt turned the garden into a beautiful outdoor room,” says Roberts. 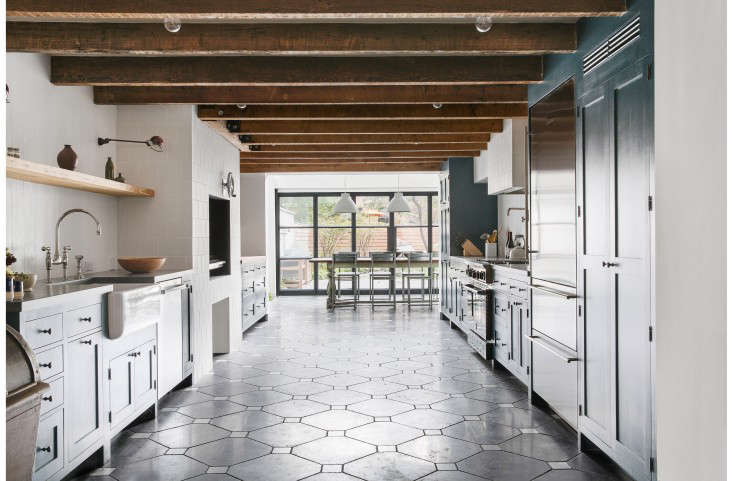 Above: A black limestone floor with white marble accents extends from the kitchen through the dining room addition and out into the garden. 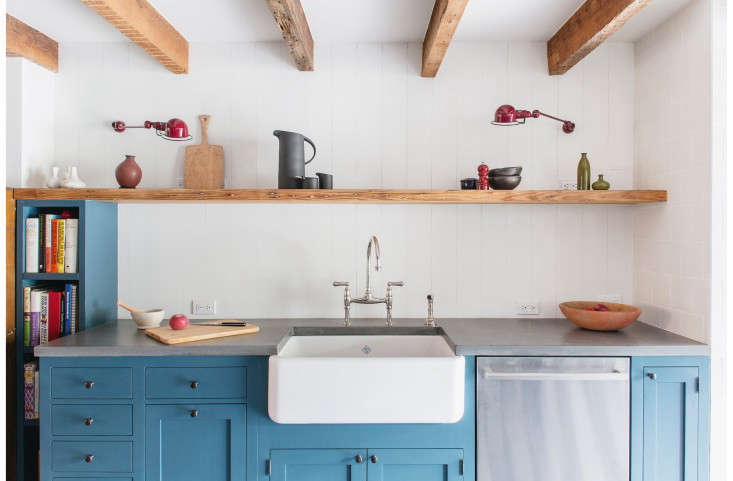 Above: By exposing the kitchen’s rustic beams, Roberts was able to gain some height in the low-ceilinged room. A Fireclay Apron Sink by Shaws is paired with an Ionian Deck-Mounted Gooseneck Faucet by Perrin & Rowe. Signal One-Arm Wall Sconces by Jielde provide red accents above the open shelf. 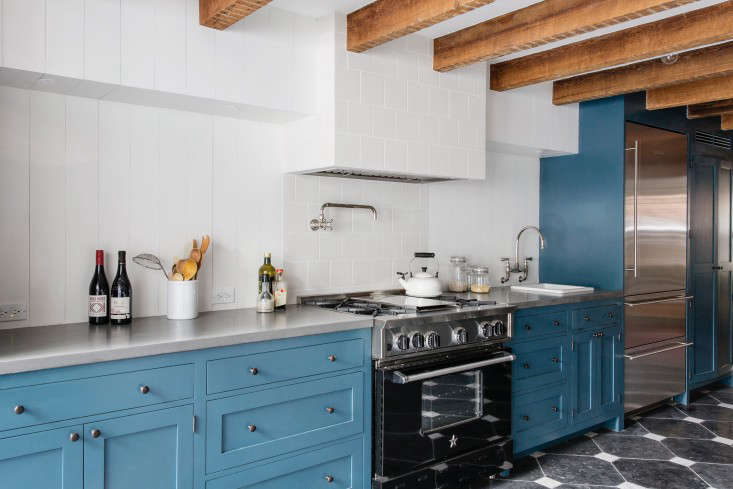 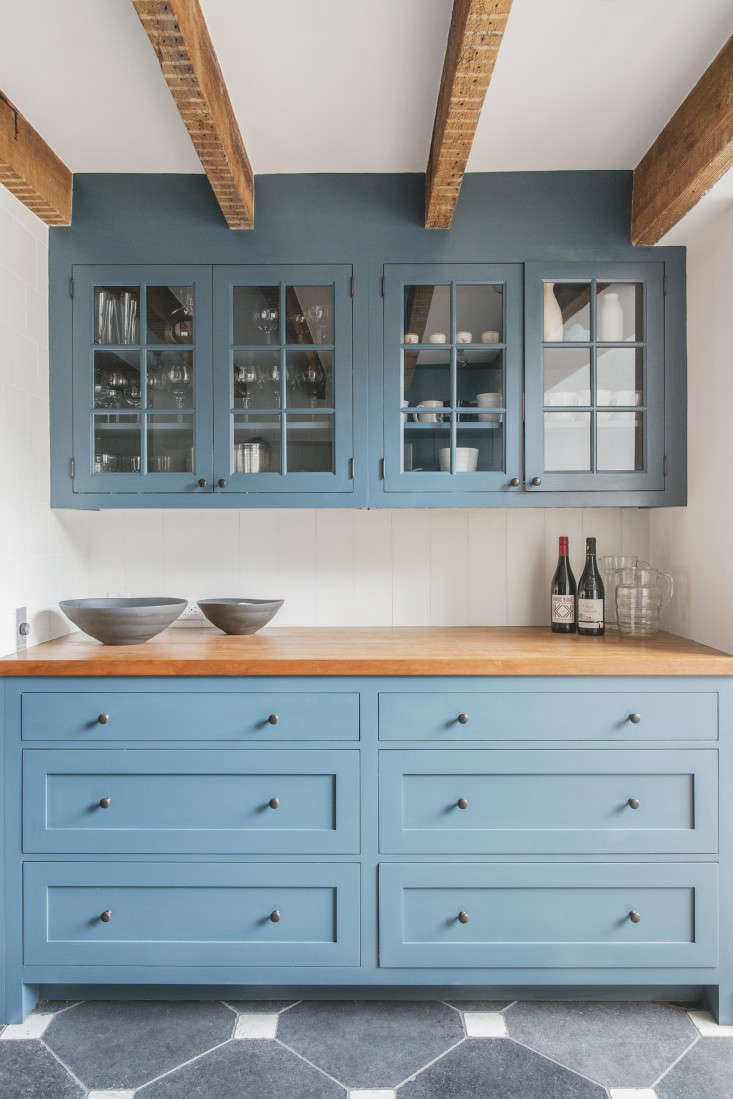 Above: In the less-trafficked pantry area, Roberts specified a cherry butcher block for the counter. 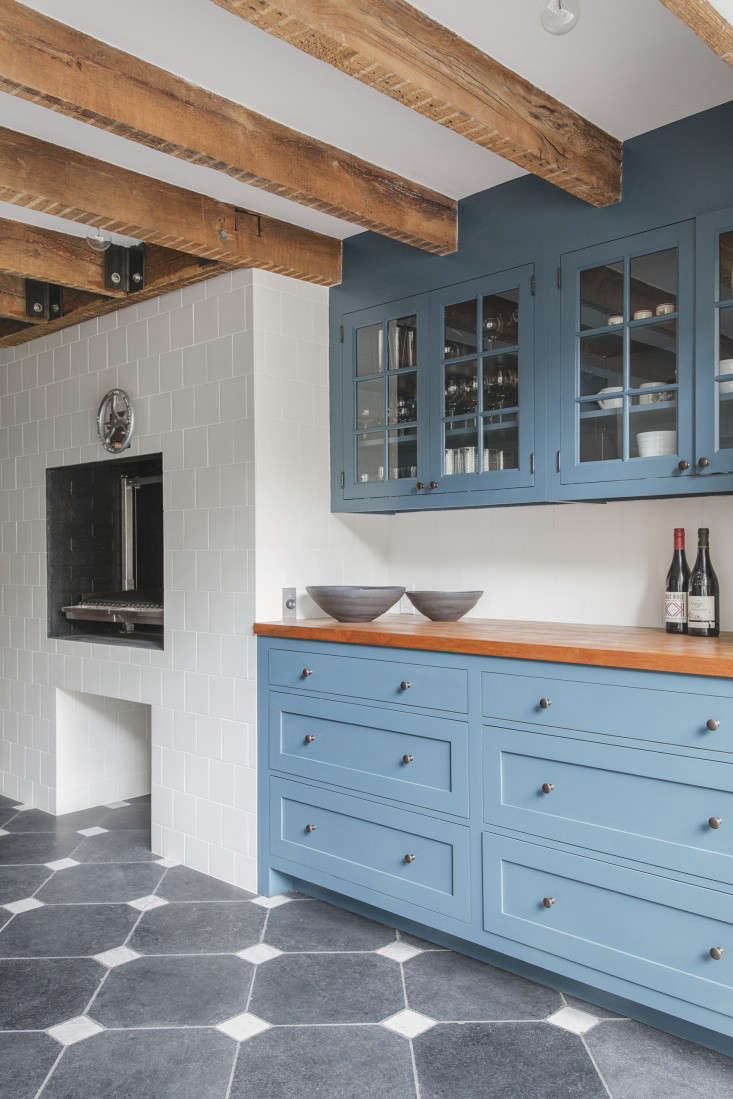 Above: “We installed a custom grill from Grillworks in the kitchen fireplace,” Roberts says. “It’s pretty amazing to be able to cook over a wood fire in the winter with natural light and greenery visible out of the corner of your eye.” The niche underneath the kitchen fireplace is for storing wood. 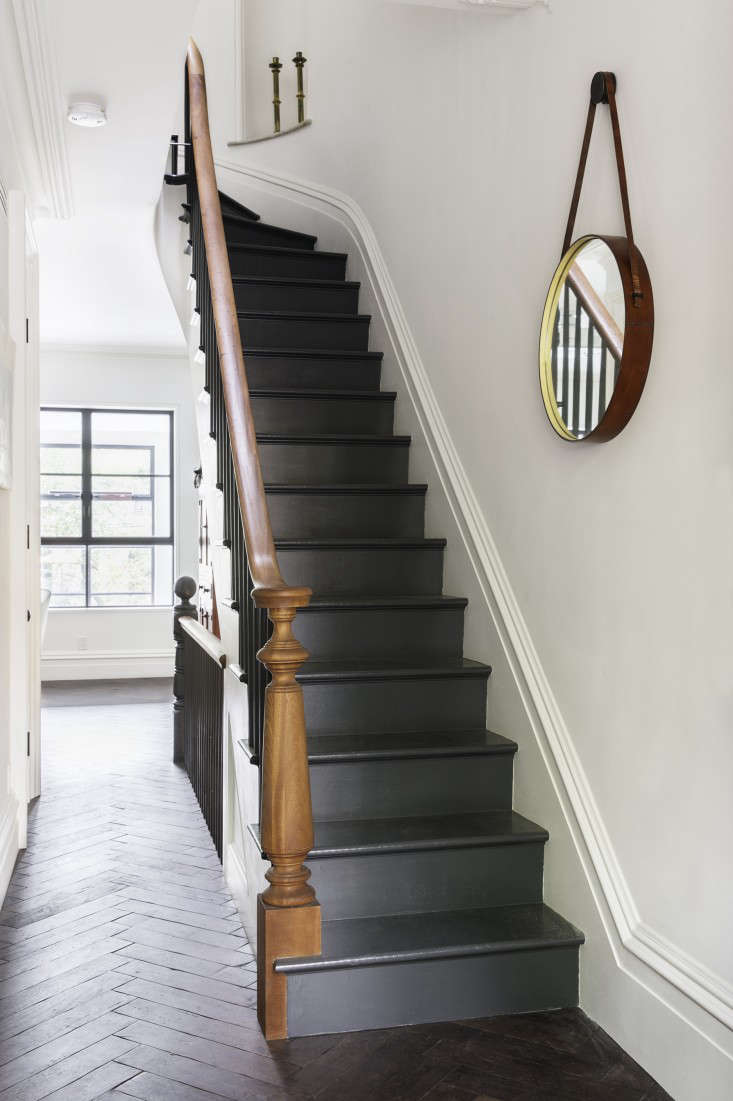 Above: The hall has a reclaimed herringbone-patterned wood floor in a custom finish from LV Wood, and the stairs are painted Off Black by Farrow & Ball. 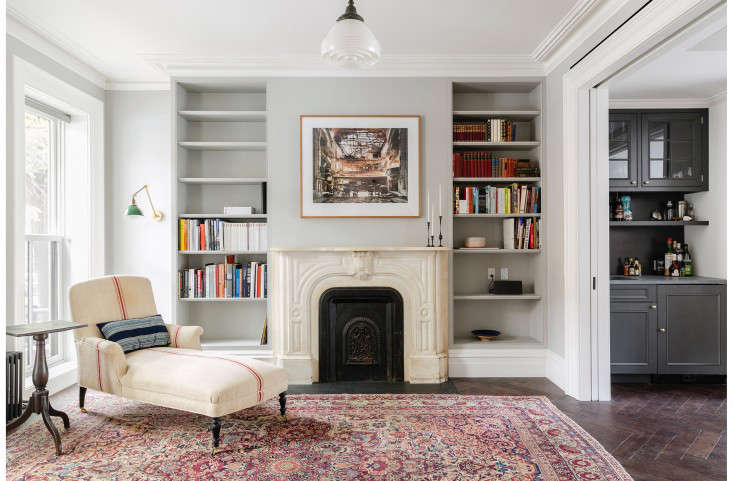 Above: The front of the house has a more traditional look. Shown here, a library with sliding pocket doors that enable the room to be closed off or opened up to the rest of the second floor. The linen-covered chaise is from Liza Sherman Antiques; the rug is an antique Lavar Kerman carpet from Iran. The walls are painted Pavilion Gray by Farrow & Ball. 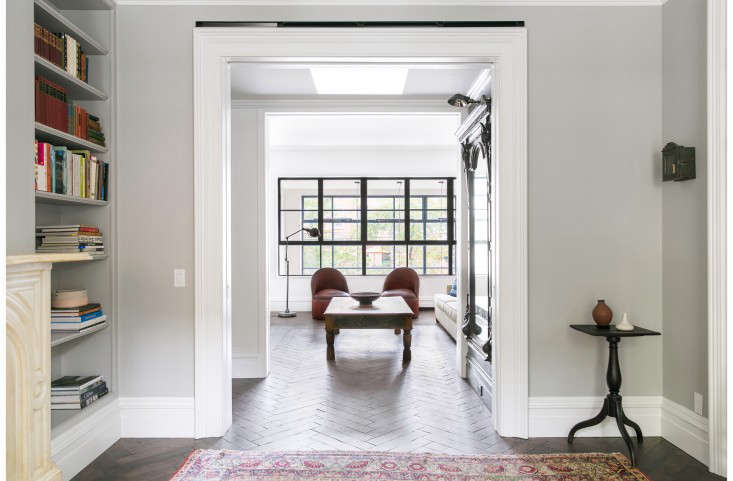 Above: The light and greenery in the back garden are visible from the library at the front of the house. 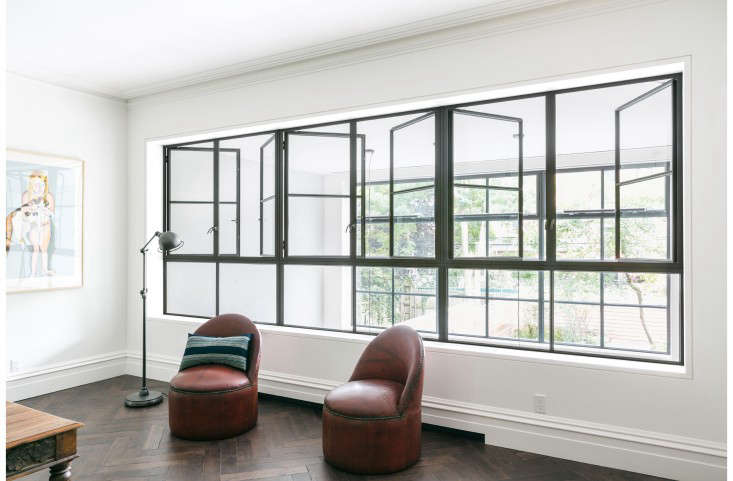 Above: A look at the double fenestration. The windows in the extension are custom powder-coated steel from Optimum Window in Ellenville, NY. “They worked with us to motorize the upper part of the dining room windows so that they could easily be opened up for passive cooling,” says Roberts. 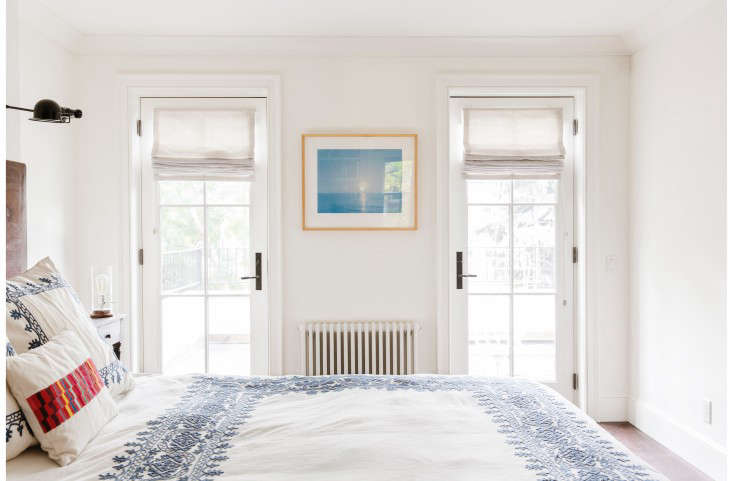 Above: Blue and white textiles in the master bedroom offer a clean and crisp aesthetic. The bedspread is from Coyuchi. 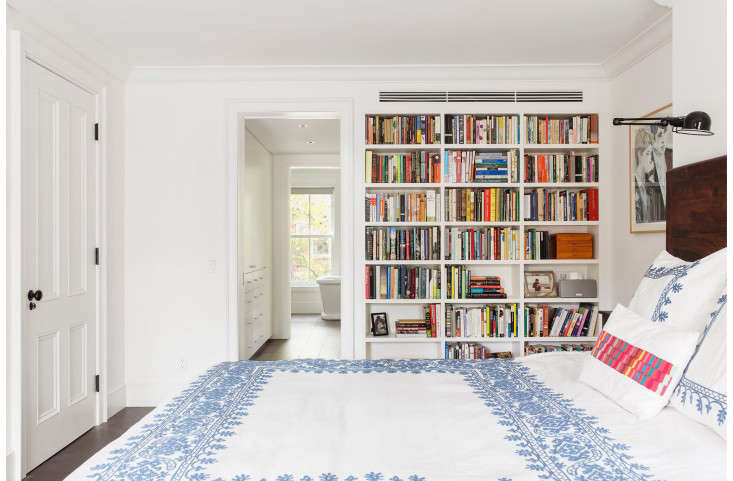 Above: A believer in serene white bedrooms enlivened by books, Roberts introduced recessed bookshelves. The custom wood headboard is from Boca Grande. 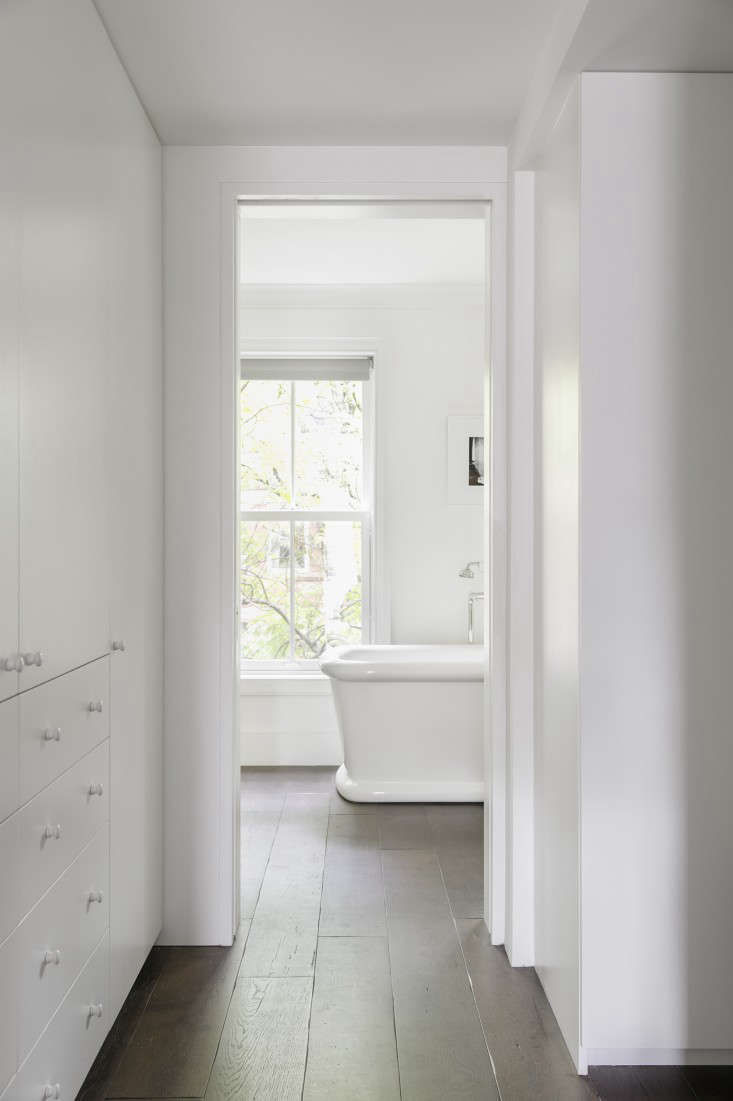 Above: A new walk-in wardrobe was inserted between the master bedroom and bath. 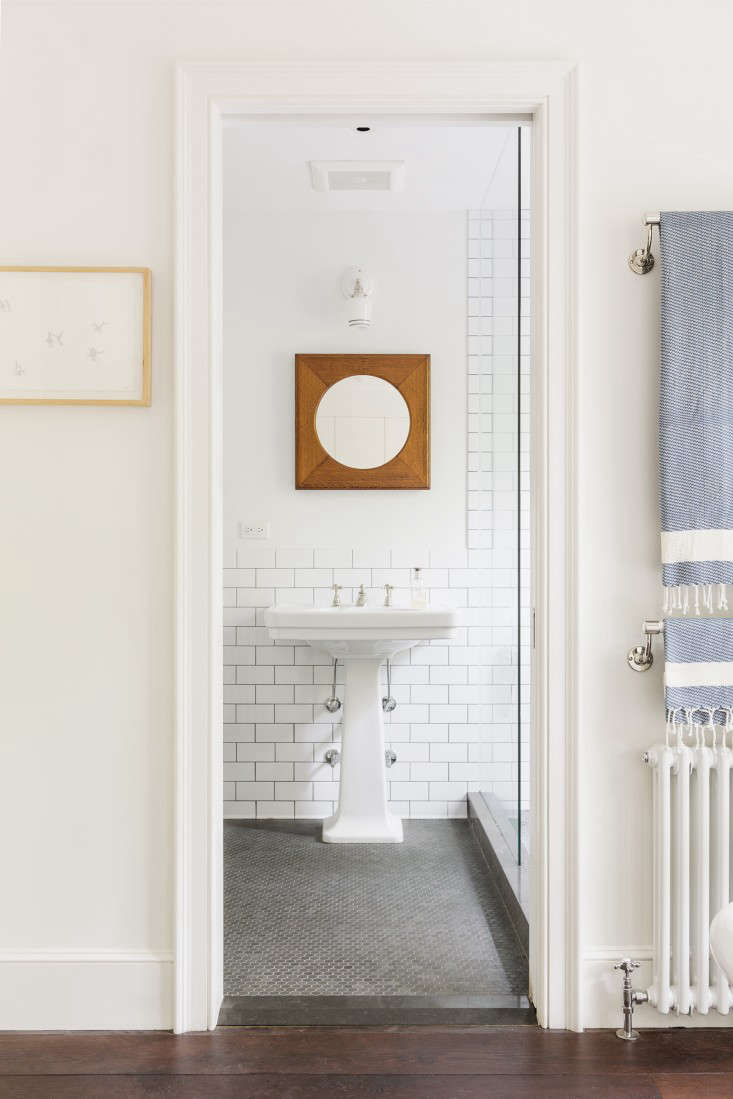 Above: The sink, toilet, and shower are in a separate room from the bathtub. 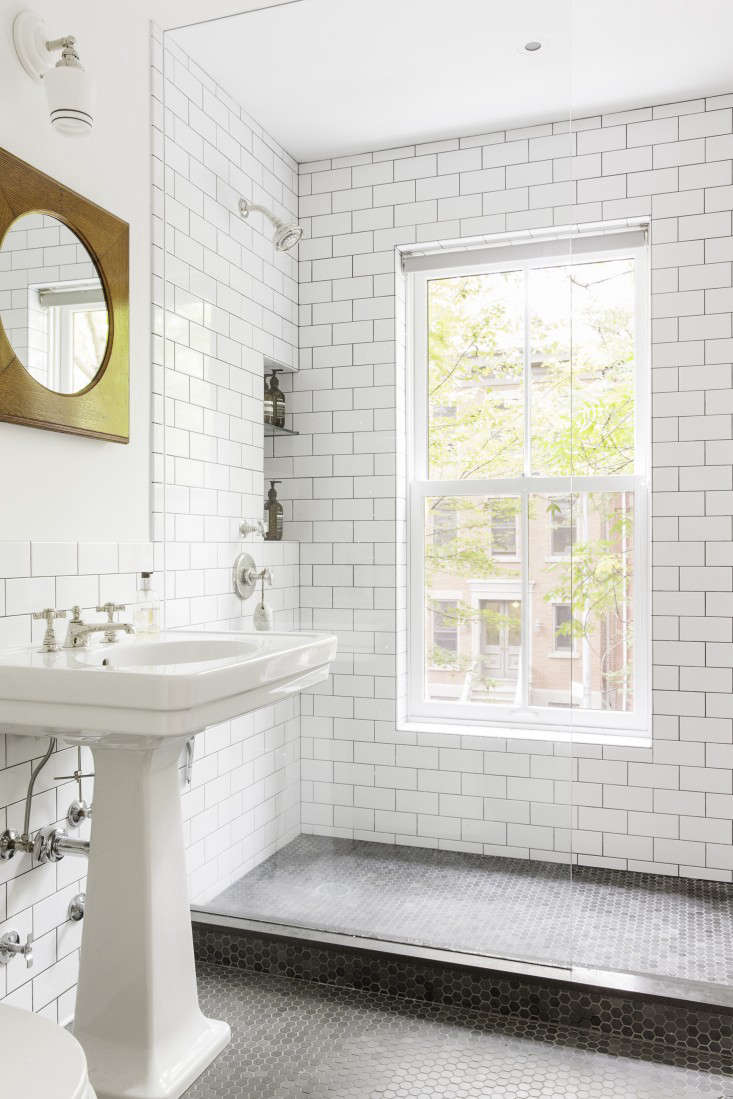 Above: The shower room is tiled with Hexagon Mosaic Tiles from Waterworks on the floor and inexpensive white subway tiles on the walls. “The idea was to keep it pretty simple and unfussy,” says Roberts. The sink is from Waterworks. 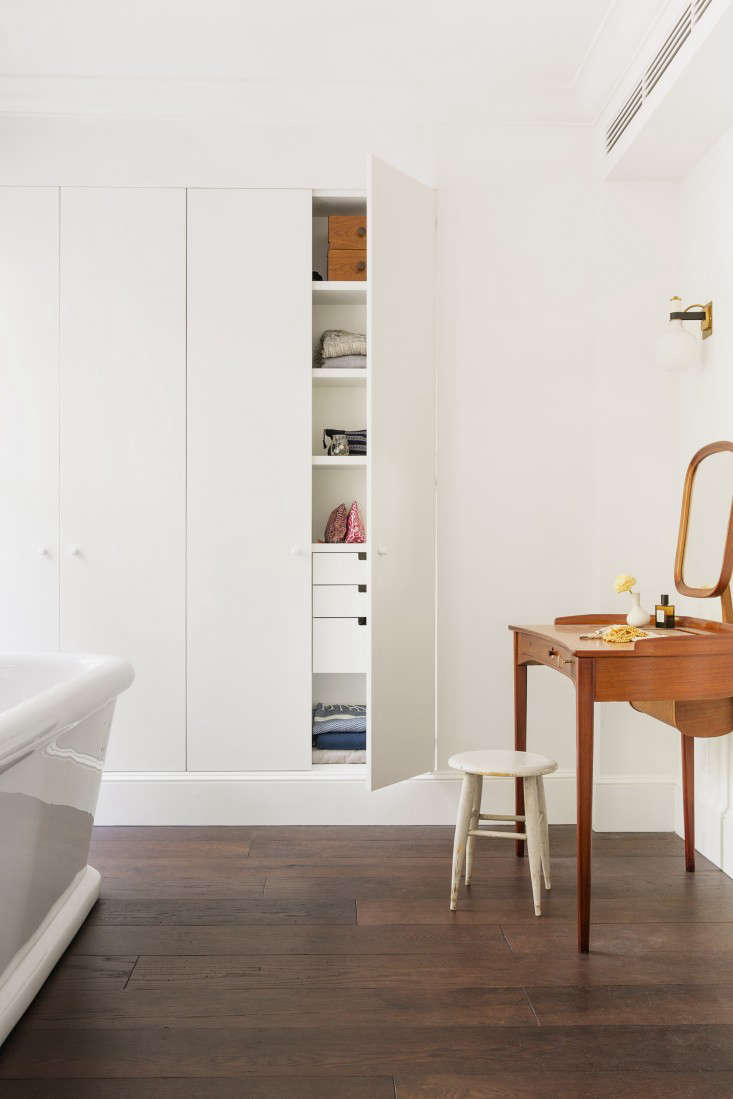 Above: Additional storage was almost invisibly built into the room. The Aegean Free Standing Bath is from Albion Bath Co. in the UK. 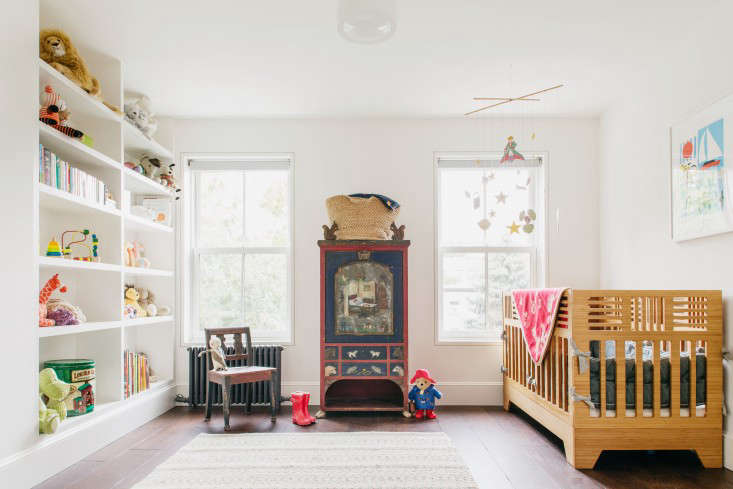 Above: In the baby’s room on the third floor, Roberts incorporated open storage for toys and books. The floor is reclaimed oak and the crib is from Kalon Studios. The vintage dresser came from Olde Good Things. 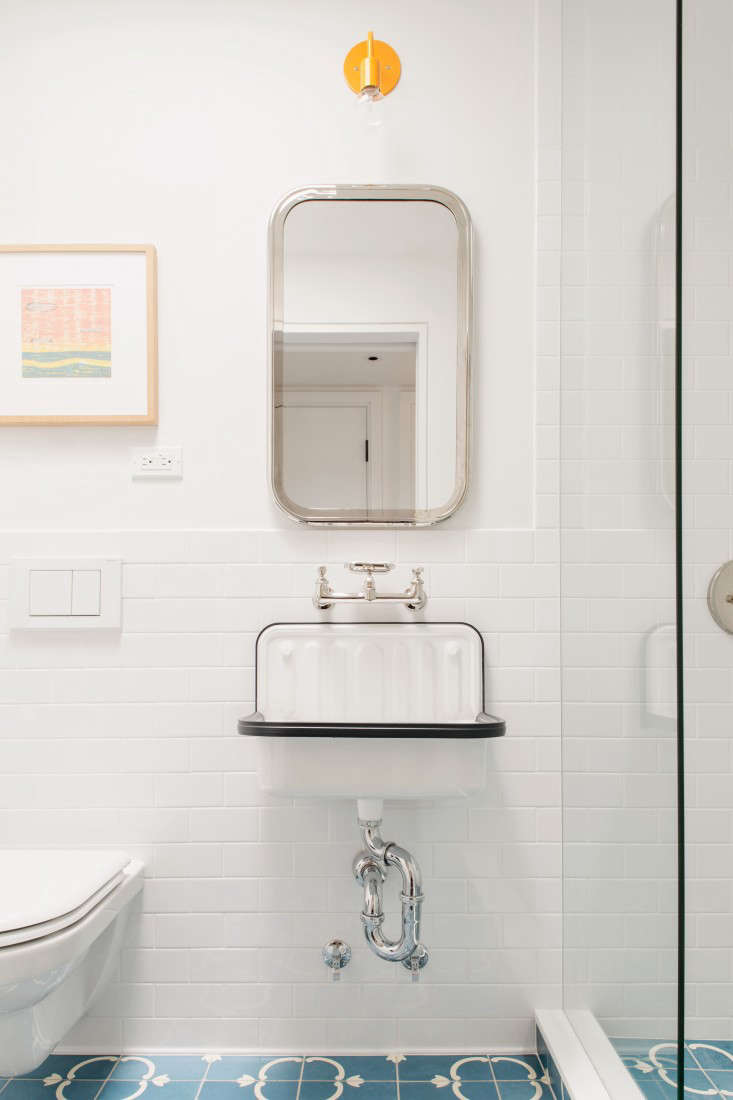 Above: An Astoria Mirror from Restoration Hardware hangs above an Alape Bucket Sink in a third-floor bathroom. To introduce light and air into the windowless space, Roberts installed an operable skylight. To source a similar wall sconce, see 5 Favorites: Bright Metal Lights for Under $125. 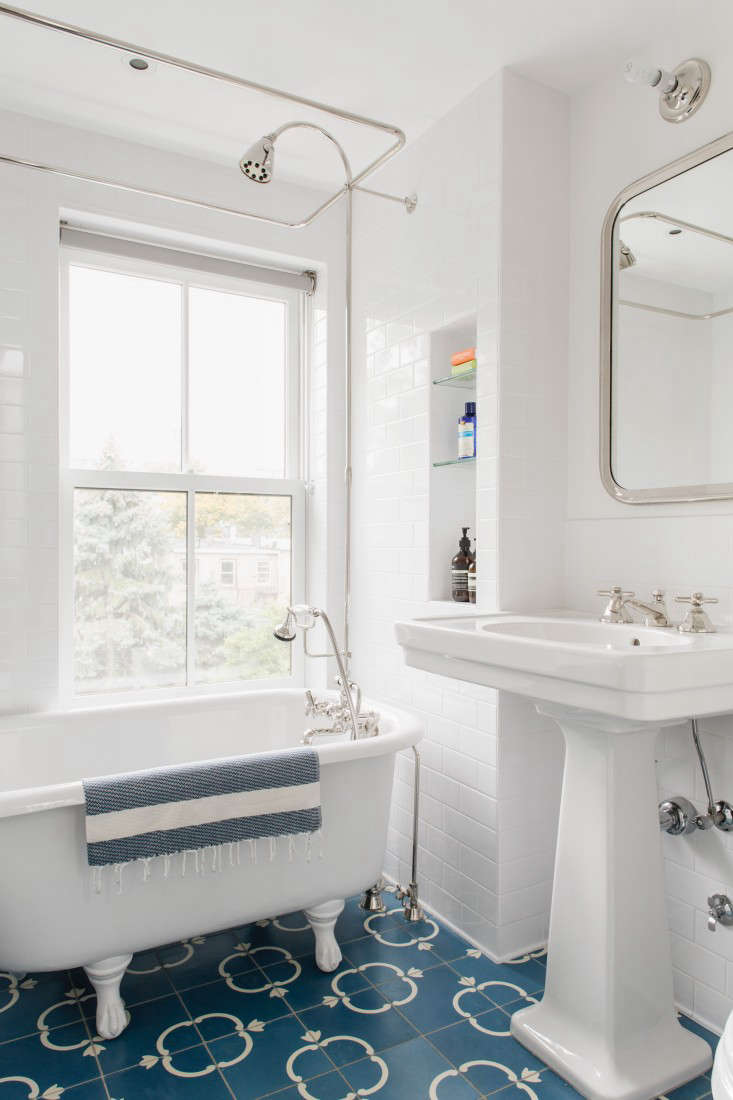 Above: Another third-floor bathroom, this one overlooking the garden, is appointed with a claw-foot bathtub and pedestal sink from Waterworks and floor tiles from Town & Country Surfaces. 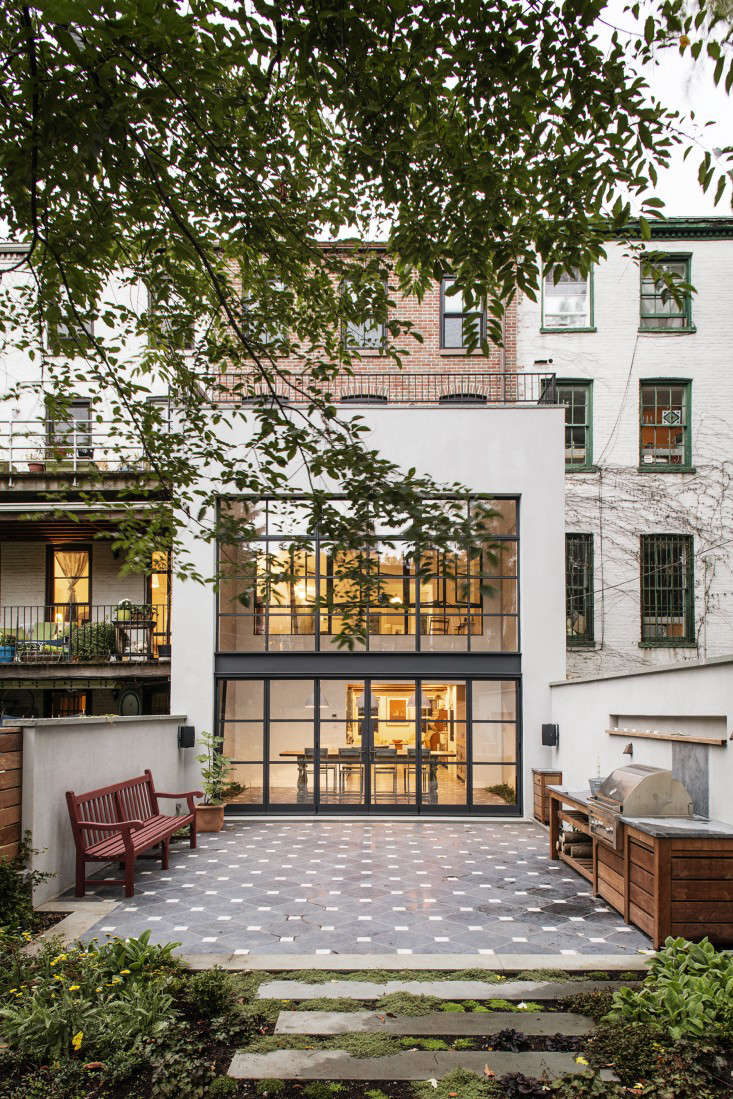 Above: An outdoor kitchen allows for a true indoor/outdoor experience.

And on Gardenista, explore the work of Landscape Architect Kim Hoyt.

Object of Desire: New Summery Table Linens from Once Milano