Scenario: Beth Dadswell and Andrew Wilbourne, a creative couple with a young son, become their own clients when they take on the renovation of a 1,750-square-foot, semi-detached Victorian in Dulwich, South London. They come with experience: She’s a fashion editor turned interior designer and the founder of Imperfect Interiors (motto: “Because who wants to live in a soulless showroom?”); he’s a graphic designer.

The Challenge: How to reinstate the original Victorian grandeur of the house while also telegraphing a comfortable and casual vibe?

The Solution: They introduce light into the tall, dark public spaces by knocking through two strategic walls and installing new glass doors that open to the garden.

Dadswell’s Top Tip: Spend time thinking about the space before you pick up a hammer: “The work you devote at the front end of a project, researching and putting together mood boards, makes for much easier and less stressful decisions later.” 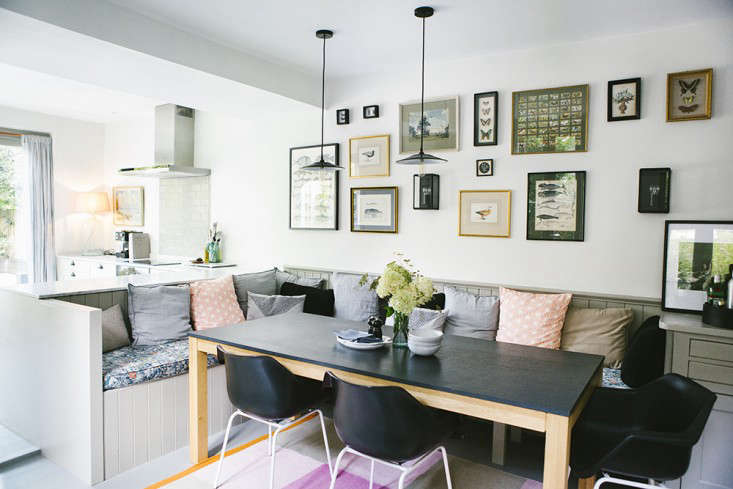 Above: The first wall that Dadswell removed was the one dividing the dining room and kitchen, where she also opened the space to the garden with a large, bifold, glazed door. “This part of the house gets the most use and is where I think the biggest transformation occurred,” she says. By building the banquette seating right up to the kitchen counters, the dining room intentionally feels like it’s part of the kitchen and garden. Adds Dadswell: “Having built-in seating means that you can fit more people around the table and hide ugly stuff in the storage underneath.” She sourced the enamel pendants, cloth cord, and fittings on eBay, and made the seating pads from her mother’s old curtains. 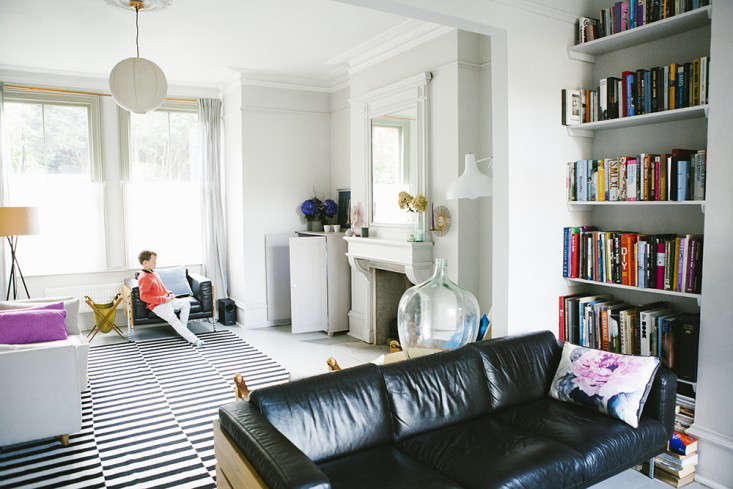 Above: Dadswell also removed the wall that separated the house’s two old-fashioned parlor rooms and introduced large French doors that lead to the garden and flood the room with light. The couple’s son, Louis, watches a television hidden in a custom cabinet. The black-and-white graphic carpet is from Ikea. 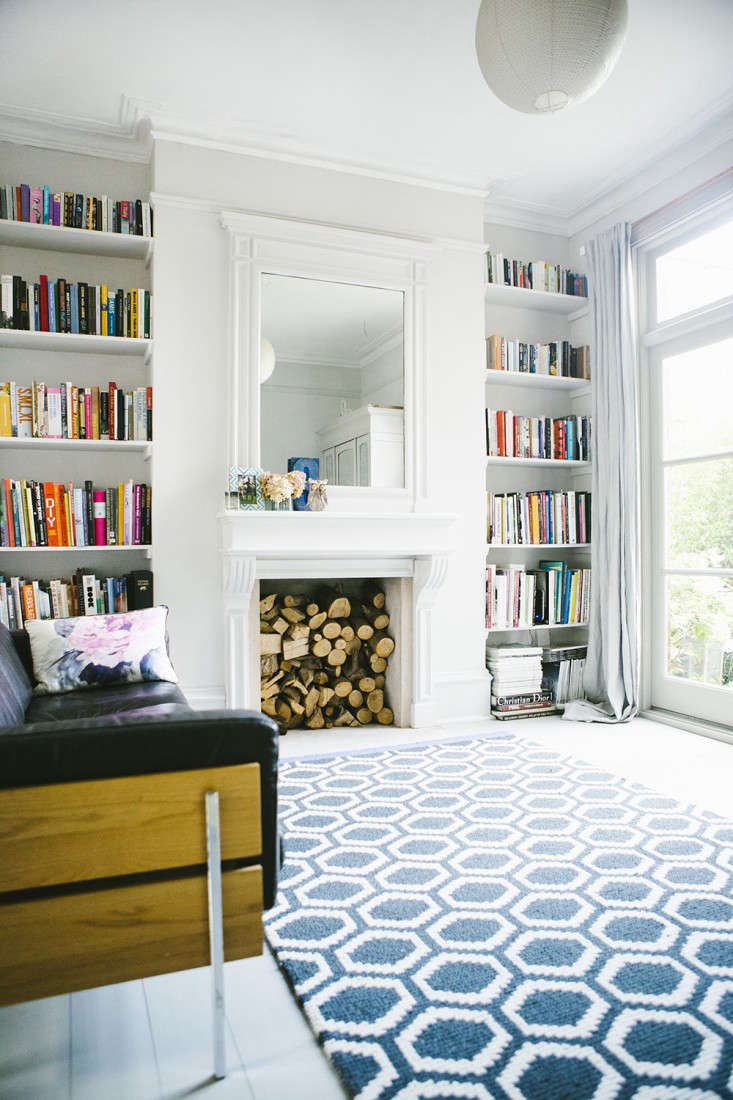 Above: In the living room, the alcoves flanking the restored fireplace were put to use as shelving. The curtains are Ikea’s Aina design in linen, and the the graphic woven carpet is from the Designer’s Guild. 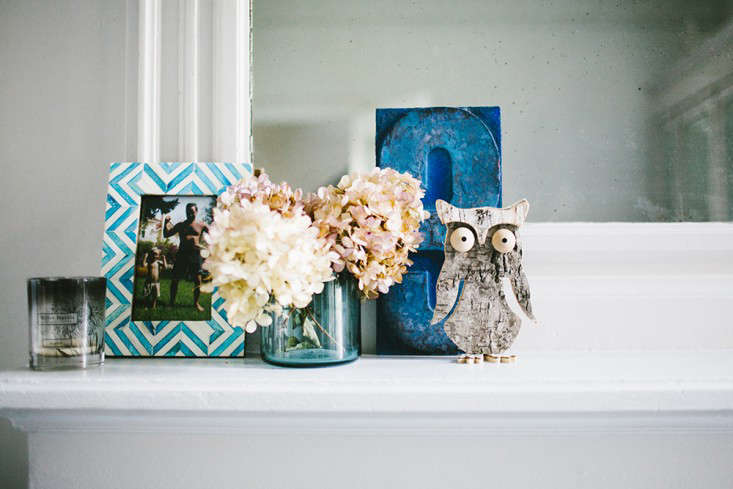 Above: The mantel still life includes dried hydrangea in a vase by glass artist Michael Ruh (who is selling his wares at this Saturday’s Remodelista Market in London) and a bark owl from Petersham Nurseries. “Rooms should be a mix of inherited pieces, things picked up along the way, and items chosen for specific purposes,” says Dadswell. “The key is to get them all to work cohesively through color and style.” 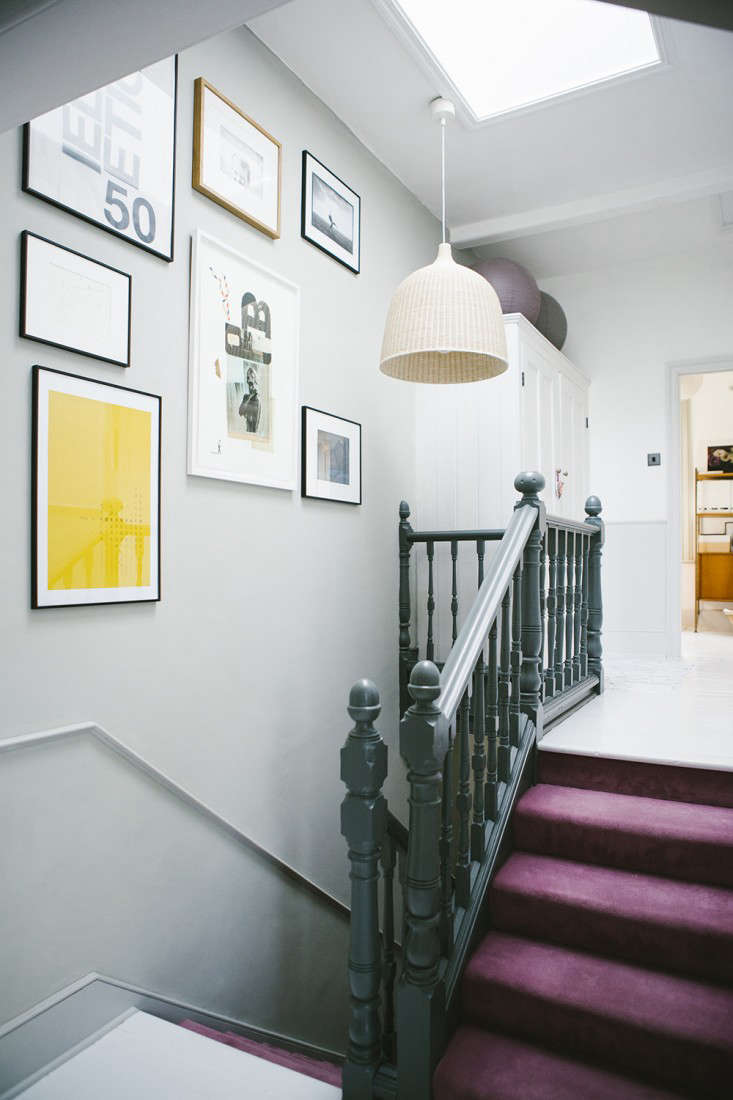 Above: In the stairwell, Dadswell painted the wall Lamp Room Gray by Farrow & Ball and the railing Farrow & Ball’s Down Pipe. She introduced a bright carpet and displays massed artwork to provide interest and contrast to the three-story-high wall. 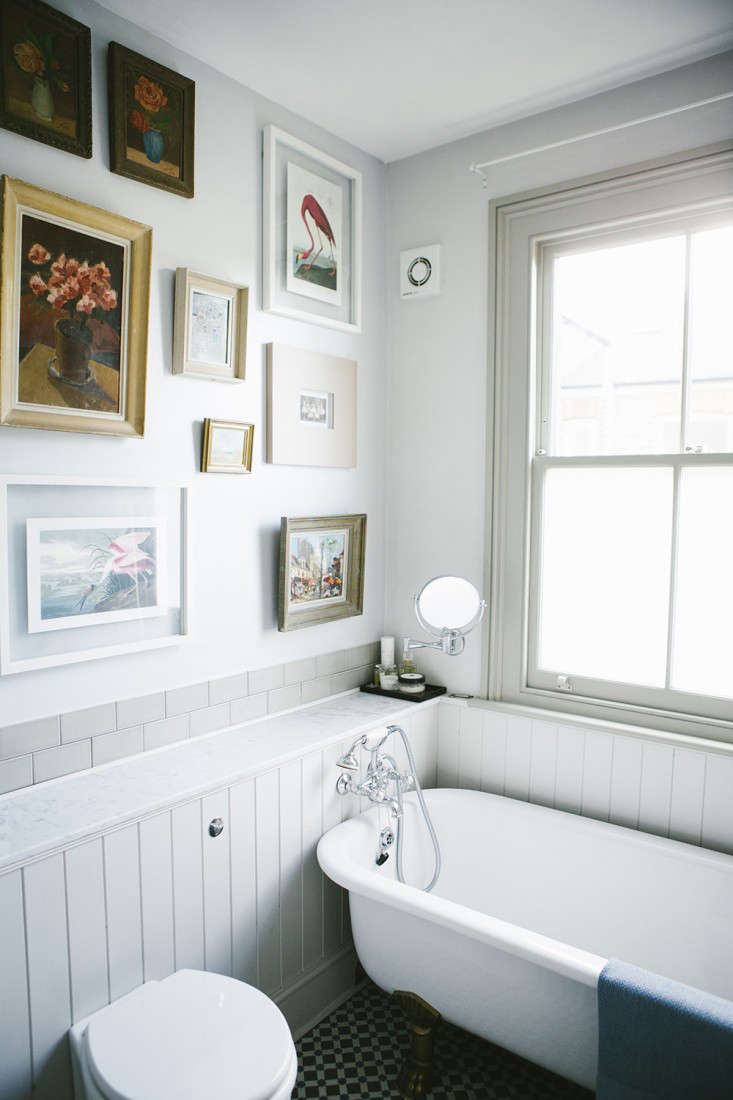 Above: The gallery-style bathroom has tongue-and-groove paneling capped by a Carrara marble shelf. Two rows of subway tiles (Retro Metro by Fired Earth) provide a minimal backsplash. The vintage claw-foot tub was sourced on eBay. 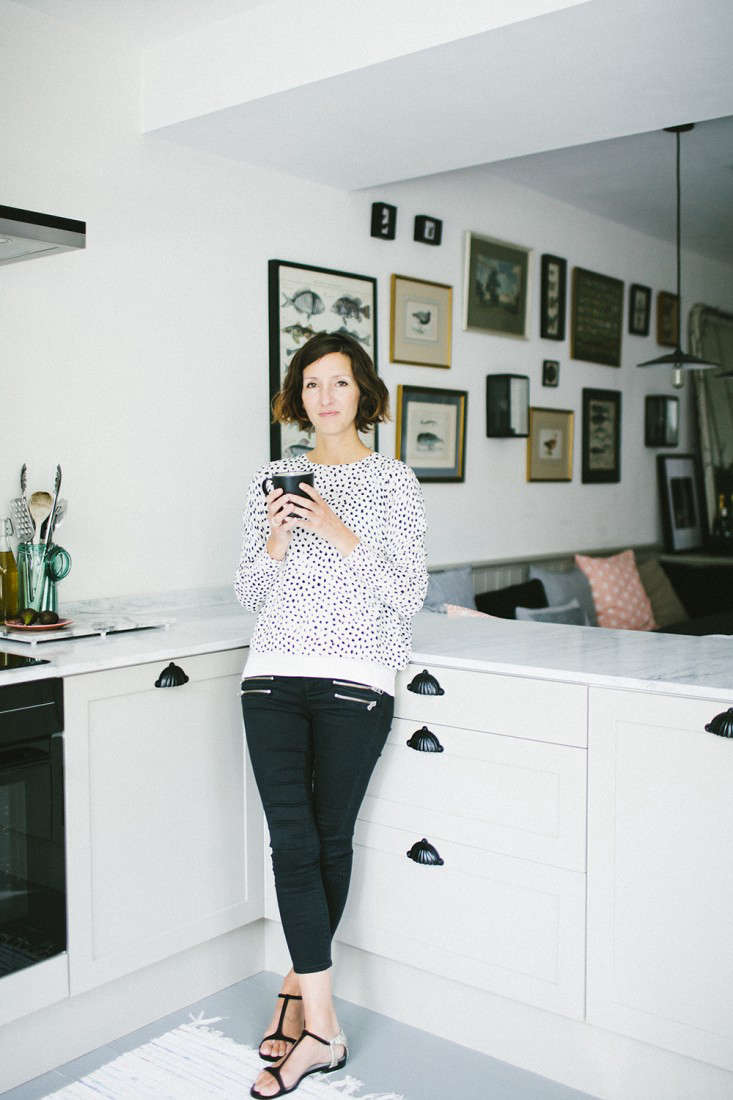 Above: Beth Dadswell in her kitchen. “We sanded and painted wood-fronted Ikea cabinets and then added vintage handles,” she says. “Nobody believes that the cabinets are from Ikea–it all comes down to the details.” 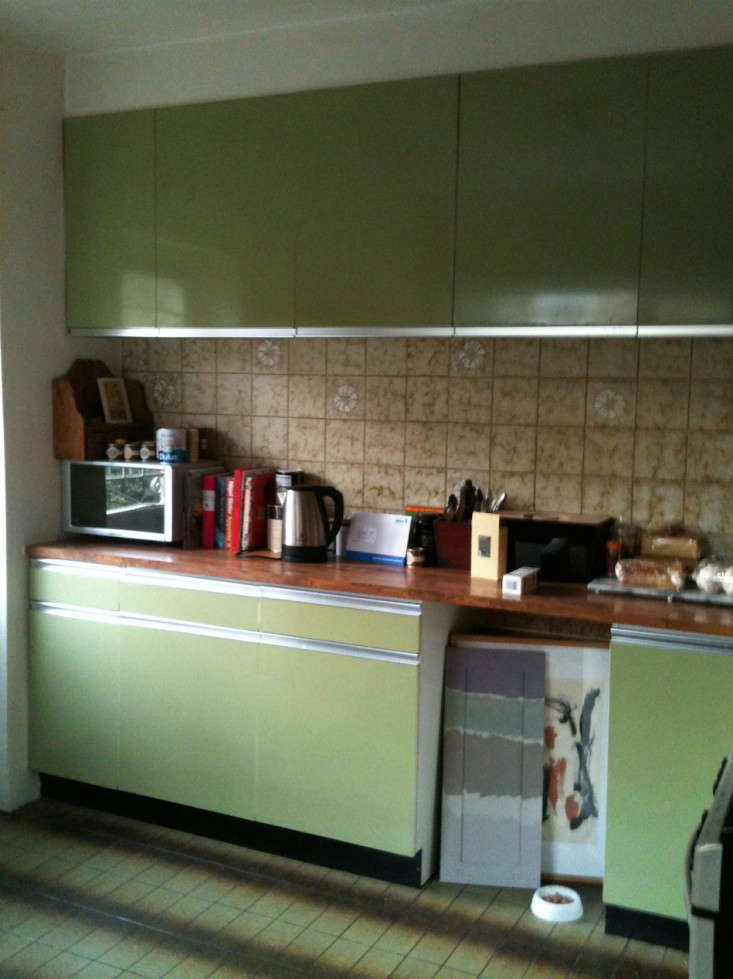 Above: The avocado kitchen was dated and gloomy. 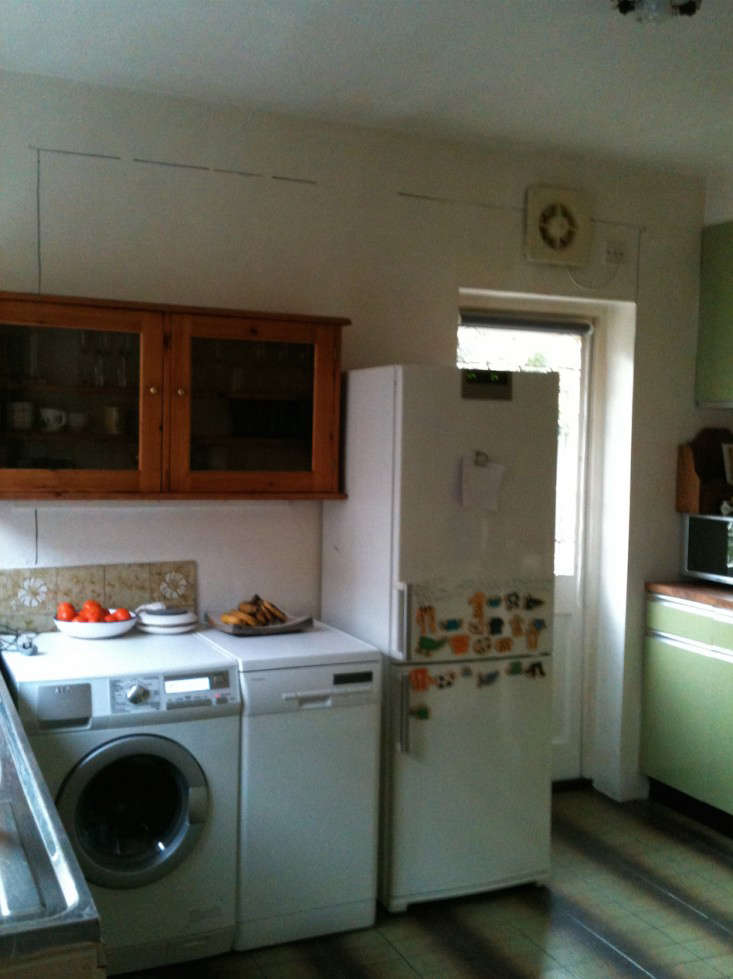 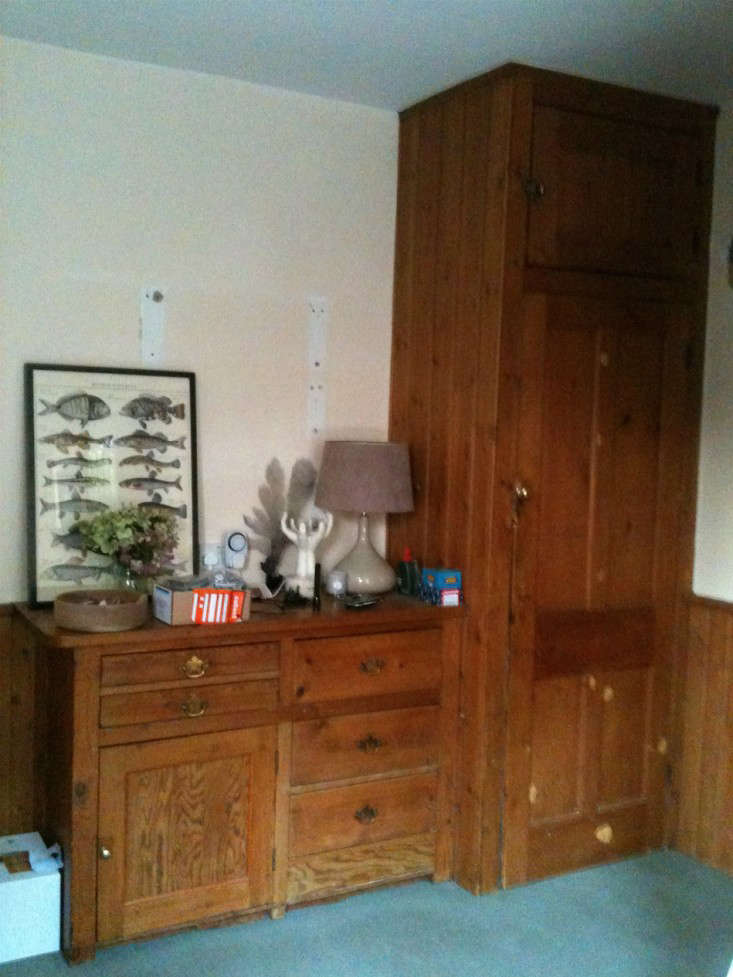 Above: “These are the dining room cabinets in their original state before I sanded them and attached vintage handles,” says Dadswell. (You can get a tiny glimpse of the After in the first photo.) “There’s a lot of wood in the house, and it had all been stained in a heavy Victorian shade of brown that made everything feel quite oppressive.” 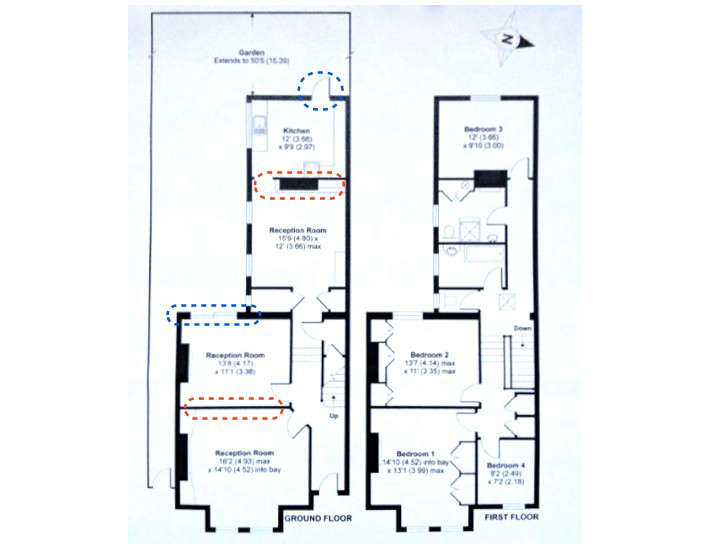 Above: The house’s existing floor plan before the renovation. The major work was done on the ground floor; the red dotted lines indicate where walls were removed, and the blue dotted lines show where old openings were replaced with larger ones.

Have a look at other inspiring house transformations:

Going to the Dogs: The Magnificent Hound in London